Robin Uthappa and Gautam Gambhir, were off to a solid start.

Andre Russell‘s quickfire 51, followed by a few healthy contributions from other batsmen lead to a wicket win for defending champions Kolkata Knight Riders (KKR), during their chase against 2014 runners-up, Kings XI Punjab (KXIP), in Match 44 of the 2015 Indian Premier League (IPL), at the historic Eden Gardens in Kolkata on Saturday.

Earlier, KXIP skipper, George Bailey won the toss and elected to bat first. Bailey made a couple of changes in his squad from the previous game, while KKR skipper, Gautam Gambhir moved in with an unchanged squad. Australian hard-hitter, Glenn Maxwell fired a healthy 43 off 22 deliveries, as Kings XI Punjab (KXIP) finished on a healthy total of 183. KKR’s mystery off-spinner, Sunil Narine too claimed four-wickets for 19 in his four overs. Live Updates: Kolkata Knight Riders vs Kings XI Punjab

KKR openers, in the form of, Robin Uthappa and Gambhir, were off to a solid start, as they put-up a 31-run opening stand, before Uthappa was dismissed for 17 by Anureet Singh, after being caught by Akshar Patel at short mid-wicket. It led to the arrival of Manish Pandey, who along with Gambhir continued to score runs in a similar manner, as KKR brought up their 50 in just 4.5 overs.

Both put up 32-run stand, before Pandey fell for 22 to Maxwell after being caught again by Patel at long on. With just six more runs added to the total, Gambhir too departed for 24 to Gurkeerat Singh after being caught by Murali Vijay. The all new pair of Suryakumar Yadav and Yusuf Pathan was not able to do much and with just 14 more to the total, Yadav departed for just nine to Gurkeerat. Live Scorecard: Kolkata Knight Riders vs Kings XI Punjab, IPL 2015

However, just when it seemed, KXIP were in firm control of the game, it was the explosive pair of Pathan and Jamaican, Andre Russell contributed a quick 53 runs off just 26 deliveries, with both the batsmen taking apart any bowler, be it fast-bowler or a spinner, as they smashed them all over the park.

However, at the score of 136, it was Pathan, who fell for 29 to Beuran Hendricks, after being caught behind by Wriddhiman Saha. Out came, Johan Botha, as Russell continued his party and quickly brought up his half-century in just 19 deliveries, the second fastest by a KKR batsman. His knock helped to change the equation, but fell for 51 to Patel for a caught behind.

With 26 required from 20 deliveries, it led to the arrival of Piyush Chawla, but with just a couple added to the total, Botha was run out for two by Patel of a brilliant direct hit at the stumps. Out came Brad Hogg, and together contributed 16-runs until the final over, when Hogg was run out by Anureet for five.

However, the very next ball was smashed for a six over deep mid-wicket by Chawla, but a wide outside off the next delivery led to his dismissal for 18, after being caught behind. Out came Sunil Narine, and scrambled for a single to pick up the win by a wicket. Russell was adjudged Man of the Match for his explosive innings. 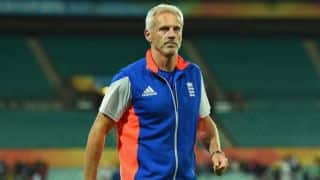