Andre Russell has smashed the ball around and put KKR on course.

Andre Russell has started smashing it around in the Indian Premier League (IPL) 2015 match between Kolkata Knight Riders (KKR) and the Kings XI Punjab (KXIP) at the Maharashtra Cricket Association Stadium, Pune. KKR are chasing 156 to win and were in trouble at 66 for five. Russell has come out and has started hitting it. His attacking batting should make an exciting watch now. Live Updates: Kings XI Punjab vs Kolkata Knight Riders

Russell has tried to hit almost every ball. Akshar Patel has borne the brunt of his willow as he smashed 19 off the 13th over bowled by the left-arm spinner. It is a very attacking display of batting and with Yusuf Pathan batting at the other end, it will be a good watch. KKR are coming off a victory and a defeat, whereas KXIP have lost two in the season so far. Live Scorecard: Kings XI Punjab vs Kolkata Knight Riders

Batting first, KXIP scored 155. George Bailey had scored a fifty and that helped KXIP put up those runs on the board. On a tough surface, that seemed about a part score but it may not be safe with Russell smashing everything. IPL 2015: Complete Coverage 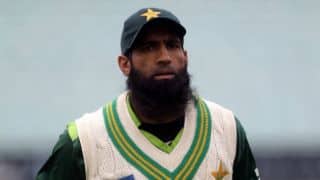