A ban would have an adverse effect on others who relied on Flintoff's extensive charity work.

The former England captain was already on nine points for speeding and in danger of an automatic ban after admitting speeding in his Bentley in January. He was caught doing 87 miles per hour near Linstock in Cumbria, magistrates were told.

But they accepted a ban would have an adverse effect on others who relied on Flintoff’s extensive charity work, The BBC reported.

Instead, the cricketer, who has been caught speeding four times in the past three years, was given the three points on his licence and fined 330 pounds but allowed to keep driving. His solicitor Michael Neofytou told the court a ban would also affect his TV work and intrude on the privacy of his three children.

Flintoff has been warned that he would not be able to use the same reasons again in court if he was caught speeding again in the next three years. The latest offence would take him to 12 points, which would normally mean an automatic ban after totting up.

Neofytou mentioned that his client’s illustrious cricket career for Lancashire and England and his being made an MBE in 2005 but did not want to dwell on those matters. He said Flintoff that was constantly raising money, or trying to, when not in his professional role.

He also said that Flintoff drove himself to charity speaking arrangements, cricket matches and auctions of cricket memorabilia and never took a fee.

Noefytou also told the court that Flintoff and his wife juggle running their charitable foundation, while looking after their three children, two boys and a girl, aged nine, eight and six.

After retiring for 20 minutes to consider the sentence, David Johnson, chair of the bench, said that because of Flintoff’s position, the fact that he is well known, clearly the impact has to be on others, more than he himself. 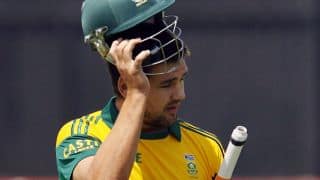