Flintoff however says he doesn't fear for reputation. Says he would risk it rather than regretting it later.

England great Ian Botham said Andrew Flintoff was making a “massive mistake” in coming back to play Twenty20 county cricket after five years out of the game. Flintoff, like Botham a pace bowling all-rounder and ex-England captain, was forced to retire through injury in 2009, his ankles and knees having repeatedly suffered from the pounding they took as he charged in.

However, Friday saw Lancashire announce the 36-year-old Flintoff was now a member of their Twenty20 squad, with ‘Fred’ set to make his comeback against arch-rivals Yorkshire at Old Trafford next week.

“While I wish him all the very best, I think he is making a massive mistake,” Botham wrote in his column in Saturday’s Daily Mirror tabloid. “We’ve not seen Fred on a cricket field since those memorable days in 2009 — and five years is a long time out of the game. For those that can’t remember that far back, Fred had no choice but to quit cricket because of a chronic knee injury that had made walking difficult let alone bowling at 90 miles an hour,” Botham added.

“Unless he’s managed to swap knees with someone, I don’t know how it has suddenly got better, allowing him to tear in and play the game properly. To come back after five years out of the game and with that injury still in the background is a huge risk. I just hope he does not let himself down too badly.” Flintoff, who was due to play club cricket on Saturday as a ‘warm-up’ for his county return, though insisted he’d no fears over possibly tarnishing his reputation.

“I’d sooner try and have it not come off than sit at home for the rest of my days thinking I should have tried this, I should have had a go,” he told the BBC. A powerful batsman, as well as an aggressive bowler and assured slip fielder, Flintoff played 79 Tests, 141 one-day internationals and seven Twenty20 internationals for England.

His greatest all-round series came when he scored 402 runs and took 24 wickets as England regained the Ashes 2-1 in 2005. But the subsequent 2006/07 Ashes saw Flintoff, miscast as England captain, lead his country to a 5-0 series defeat in Australia. His international career did though finish with a flourish when he ran out Australia captain Ricky Ponting in the fifth Test at The Oval in 2009, a match England won by 197 runs to regain the Ashes. 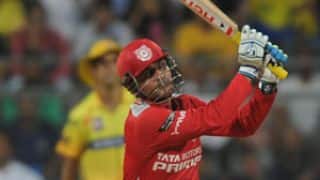