Andrew Flintoff believes Australia would benefit by playing both the all-rounders.

Former England captain Andrew Flintoff has urged Mitchell Marsh to go into Shane Watson‘s apprenticeship in order to develop into a great all-rounder. Flintoff was full of encouragement for Australian rookie Marsh, the latest member of one of Test cricket’s toughest tribes: the all-rounders.

While there is a line of thought that Australia can carry only one all-rounder in the side, Flintoff argued that fielding both Watson and Marsh would do wonders for the younger player’s development, news.com.au reported.

Flintoff said that Watson is a proper cricketer, adding that as a batter he’s someone he didn’t really like bowling against. He claimed that his style of bowling suited Watson’s batting and admitted that with the ball the all-rounder is dangerous. Flintoff said that with Watson in the side he could help Marsh out.

As a Big Bash League commentator and domestic side Brisbane Heat squad member, Flintoff would have ample opportunities to watch both Australian all-rounders this summer. Flintoff, who compiled five tons and 226 wickets during his Test career, wants the Western Australian to keep things simple as he develops his craft.

Flintoff said that Marsh has got a technique which works, and as the all-rounder bowls more he would get quicker. He is hopeful that the Australian is going to be a big player of the future. Marsh averages 40 with the bat and took the game beyond India’s reach with his entertaining knock during Australia’s second innings on Friday, the report added. 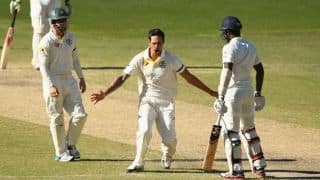