Alastair Cook triggered speculation about his captaincy when he told the Cricketer magazine that he did not know "how much longer I am going to carry on.

Director of England cricket Andrew Strauss expects Alastair Cook to carry on as the Test captain well into the summer of 2017, saying the 31-year-old is comfortable with the responsibility. Cook triggered speculation about his captaincy when he told the Cricketer magazine that he did not know “how much longer I am going to carry on. It could be two months, it could be a year”. Talking to reporters in Visakhapatnam ahead of the second test against India, Cook’s former opening partner Strauss ruled out a change in test captaincy “He’s batting well and he’s still young. It is quite scary how young he is really and I have every faith that he will carry on past this series and into the summer,” Strauss said. Live Cricket Scorecard: India vs England 2nd Test at Visakhapatnam

“He is in a really good place… very comfortable leading this team for a while. So, it probably takes less out of him now than it used to.” Cook, who surpassed Michael Atherton’s England record of 54 matches as test captain after the first test against India in Rajkot, replaced Strauss as skipper in 2012. Strauss said the Cook has many years left to continue doing well with the bat and mentor youngsters. One of them could be 19-year-old Haseeb Hameed who struck an impressive 82 during England’s second innings at Rajkot to forge a 180-run opening stand with Cook.

“Hameed looked very composed and calm and in control of his game. He’s got a very effective game against spin, we’ve got some very high hopes for him,” Strauss said. 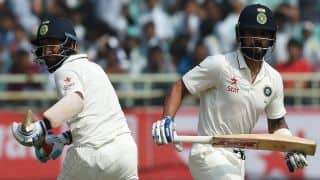