"The rationale is that the game of cricket is evolving unbelievably quickly, and I think we feel responsibility to ensure the international game develops." - Andrew Strauss

England and Wales Cricket Board director Andrew Strauss said the sport could not afford to have its “head stuck in the sand” as he confirmed a new multi-format ‘Super Series’ will be in place for England’s home series against Sri Lanka and Pakistan this season. Thursday’s first Test between England and Sri Lanka at Headingley will break fresh ground by being the first in men’s cricket where a new points system, modelled on the one used by England and Australia for the women’s Ashes, will be employed.Four points will be allocated to a Test win and two for a draw, with two points for a win in ‘white-ball’ cricket and one for a tie in any of the limited overs matches, with the ECB backing their own plan by putting up an additional prize of £25,000 ($36,495) to the overall Super Series winner. Full Cricket Scorecard: England vs Sri Lanka 2016, 1st Test at Headingley

“The rationale is that the game of cricket is evolving unbelievably quickly, and I think we feel responsibility to ensure the international game develops,” said Strauss.

“Central to that is context and relevance for every game of cricket you play,” the former England captain added. “We believe the Super Series will provide that by connecting the formats and ensuring every game counts for something more than just itself.” One-day matches in England have been regarded as something of an after-thought and Strauss sees the new system as a way of keeping fans engrossed throughout the season.
“We feel this is a good way of ensuring the game remains relevant in both fans’ and players’ minds,” the former opening batsman explained. Had the same points formula had been applied to England’s last two tours, the outcome would have been decided in the last match, with a different winner to the Test series. ALSO READ: England vs Sri Lanka 2016: Kaushal Silva urges teammates to step up in absence of Kumar Sangakkara, Mahela Jaywardene

With franchise Twenty20 competitions such as the Indian Premier League increasingly popular, Strauss said the international game had to evolve.

“Anyone out there who doesn’t see the need for international cricket to keep moving forwards really does have his head stuck in the sand,” said Strauss. “What I worry about is people just sitting there saying ‘It’s going to be all right’ and not doing anything about it. ALSO READ: England looking for revenge against Sri Lanka, declares Stuart Broad

“I think we have to be on the front foot on this and say ‘Look, we have a very vibrant Test support in this country, and we’ve seen some fantastic Test matches over the last 12-18 months, but there are some worrying signs there — so let’s act before it’s too late’.” England Test captain Alastair Cook said nothing would be lost by introducing a points system. “If it doesn’t work, it doesn’t work,” he told reporters at Headingley on Wednesday. “But I think in this day and age, we’ve got to be open to new ideas.” Former England captain Mike Atherton, however, writing in Wednesday’s edition of The Times said he felt “profound indifference” towards the plan.

“In 2009, for example, England won the Ashes 2-1 and lost the ODI (one-day international) series 6-1, which means that Australia would have run out the clear overall winners,” he wrote. “The reality was that England proved to be a better Test team over five games and Australia were a better one-day team. “Sometimes it is fine to leave it at that.” 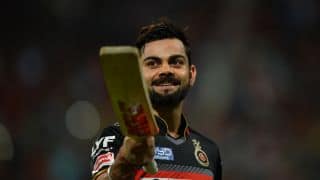 Permutations and combinations: Can Virat Kohli's Royal Challengers Bangalore make it to playoffs of IPL 2016?