England captain Andrew Strauss was nearing the end of an 18-month century drought as his side strengthened their grip on the first Test against the West Indies at Lord's on Friday. 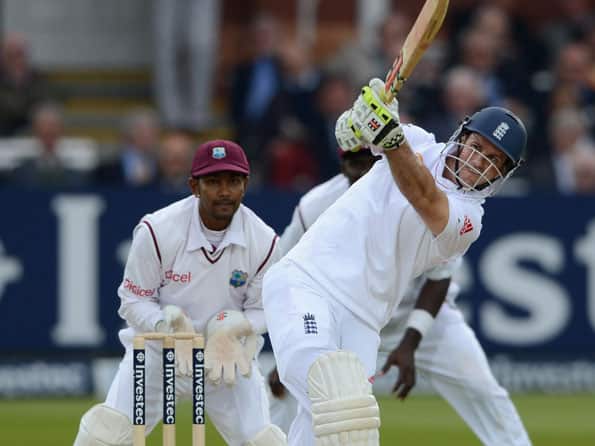 England captain Andrew Strauss was nearing the end of an 18-month century drought as his side strengthened their grip on the first Test against the West Indies at Lord’s on Friday.

Strauss was 78 not out in a total of 167 for one that left England just 76 runs behind West Indies’ first innings 243 at tea on the second day.

The opening batsman was thriving in the familiar surroundings of his Middlesex home ground and together with Jonathan Trott (50 not out) had added an unbroken 120 for the second wicket.

Left-hander Strauss scored the last of his 19 Test hundreds against Australia at Brisbane in November 2010.

After Stuart Broad wrapped up the West Indies innings with the first ball of Friday’s play, England made a steady start to their reply.

The only wicket to fall in their innings thus far came when Alastair Cook was out for 26 after inside-edging a cut off Kemar Roach into his stumps.

England, 80 for one at lunch, initially found runs hard to come by after the resumption, with the floodlights now switched on to counter the gathering gloom.

Indeed Trott was twice fortunate not to be out for his interval score of 17.

But as replays showed the ball would have only just clipped leg stump, Dar’s original verdict was upheld.

Trott hadn’t added to his total when there was a half-hearted appeal for a catch behind. Dar was not interested and this time there was no review request, even though replays indicated a nick.

Strauss meanwhile carried on in serene fashion against a willing, if largely unthreatening, West Indies attack.

His straight driven four off Sammy was a textbook shot and a leg-glanced boundary off his rival captain, the ninth of his innings, saw Strauss complete a 97-ball fifty.

Sammy brought on part-time off-spinner Marlon Samuels — the tourists had omitted specialist spinner Shane Shillingford from their XI — as his seamers struggled to make the ball swing.

But when Samuels dropped short, Trott eased him off the back foot through the covers for four and later an increasingly assured Strauss advanced down the pitch to loft him over mid-on for a four that saw the second-wicket partnership to a century stand.

Trott, after his double ‘escape’, was rarely troubled and completed a 105-ball fifty featuring six boundaries.

Earlier West Indies, who resumed on 243 for nine, saw No 11 Shannon Gabriel’s maiden Test innings end in a golden duck when he edged Broad to Graeme Swann at second slip.

As a result, Shivnarine Chanderpaul remained stranded on his overnight score of 87 not. The left-hander, officially the world’s best Test batsman, was in for more than four hours and struck 12 boundaries.

During the course of this return, Broad, son of former England opening batsman Chris, became only the seventh player in history to take both five or more wickets in a Test innings and score a Test century at Lord’s.

Broad made 169 — his highest Test score — against Pakistan at Lord’s two years ago.(AFP)