Australian legend Steve Waugh believes former England paceman Andy Caddick was one of the most difficult bowlers he had to contend with during his record-breaking two-decade career. Former Australian captain Waugh re-lived his epic Ashes century at the Sydney Cricket Ground (SCG) in 2003, talked about bouncing Vivian Richards and touched on other career highlights including his era-defining double hundred in Jamaica against the West Indies in 1995 before talking about right-arm pacer Caddick.

“Caddick was one of the most under-rated bowlers I played — I think he had as much talent as anyone. But there was some piece of the puzzle that was missing in his armour and he didn’t live up to what he should have done,” the 45-year-old was quoted as saying by Cricket Australia (CA) website.

“I found him awkward. The bounce, he’d take the ball away. There were other bowlers I felt probably less comfortable with (as well), like Gladstone Small and Angus Fraser – for whatever reason I couldn’t tend to get on top of those guys, and at domestic level, Craig McDermott used to get me out for fun. I think everyone has their bogey bowlers.”

Caddick dismissed Waugh, who scored 10,927 runs in 168 Tests, 10 times in the five-day form of the game, a feat bettered only by the legendary Curtly Ambrose (11 times). Ambrose also dismissed Mark Waugh on 15 occasions, but the twins famously turned the tables on the West Indies in that fourth Test in 1995, when they ended a period of prolonged Caribbean domination as Steve made 200 and Mark 126 to win the fourth Test and with it, the series.

“They’d been unbeaten as a team for 15 years, which is quite phenomenal. We hadn’t beaten them in 22 years – we’d gone close in Adelaide, we’d lost by a run under Allan Border’s captaincy, which was pretty shattering for all. We came to Jamaica one-all, and we just felt as if it was our time,” Waugh, who accumulated 7,589 runs in 325 One-Day International (ODI) matches, said.

“(Then Australia coach) Bob Simpson was pretty instrumental in all of that, because he’d been into the batting group about us not getting big hundreds. We sort of felt like he was being a bit harsh on us because they were a pretty handy attack. We were doing our best, but it sort of stuck with me that, ‘Yeah look, someone has to go on and get a big hundred to beat these guys’.”

Lisa Sthalekar: An Aussie with great fondness for her Indian roots and cuisine 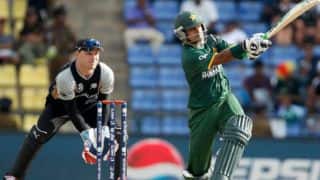