Former Sri Lanka skipper Angelo Mathews became the fourth Sri Lankan to reach the ODI double of 5,000 runs and 100 wickets. In the ongoing second ODI against India, Sri Lanka are tottering in a mammoth chase of 393. Courtesy Rohit Sharma’s third double-hundred, India are on the verge of levelling the three-match series. Amidst all this, Mathews has remained the lone warrior, unbeaten on 64 at the time of publishing this report. He joined the elusive club at 63.

Mathews has been the backbone of Sri Lanka cricket since long. Whenever the chips are down, he delivers. Though he has not been bowling in Tests due to back issues, he has chipped in with regular breakthroughs in limited-overs formats. In addition, Mathews averages over 40 with the willow including 35 fifties and a hundred. He continues to guide the side in vital chases by holding one end. 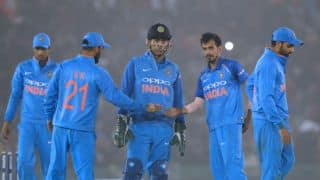