After Sri Lanka’s defeat in first Test against England at Headingley due to poor batting performance, skipper Angelo Mathews is set to take precautionary measures. Sri Lanka lost by an innings and 88 runs being bowled out for 91 and 119 in both their innings. Mathews also mentioned that short duration between the first two Tests has helped them to prepare well and learn from the negatives. Mathews did credit Kusal Mendis who was the only high scorer in the second innings with his half century. They will heavily feel the absence of Dushmatha Chameera who is out of the tournament due to injury. He might also not be available for the series against Australia. FULL CRICKET SCORECARD: England vs Sri Lanka, 2nd Test, Day 1 at Chester-le-Street

Mathews in conversation with Times of India said, “We have more clarity on the batting approach, and also we’ve found the right balance. It’s just that when you play more games, you tend to learn more. Batting is also an art, and Test cricket is an art. It is a test of skill and temperament. It can’t be an excuse because we are all international players and we’ve played enough cricket now to understand what roles we have to play in the team in the batting line-up.”

He further added, “As a batter you have got to have that balance. If you play a whole day and don’t get a run, it’s useless. You do have to be positive when a bowler is bowling really well, but you’ve also got to survive that situation when someone like Broad or Anderson is bowling. Those little phases, you’ve got to win and not lose wickets. When the ball is old and the wicket settles down you can score runs.” ALSO READ: England Football asks England cricket for tips to beat Australia

Sri Lanka has learnt from their negativity and learned the right lessons, “We’ve had only a few days to turn around and think about our strategies,” he pointed out. “We just have to flush that game out of the system because the more we think about it, the more disappointed we get. You can’t erase it, but you can move on and work really hard to have a positive mindset to take into the next game.” 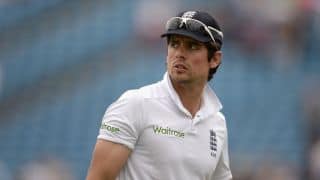