Angelo Mathews is the leading run-scorer in the current Sri Lankan team.

Sri Lanka skipper Angelo Mathews went past 4,000 runs in Tests during his innings against New Zealand in the first innings of the second Test at Seddon Park, Hamilton. Mathews is the 10th highest run-getter for Sri Lanka and the leading run-getter in the present squad. Mathews has been entrusted to lead this Sri Lankan team into its new era after some big names like Kumar Sangakkara and Mahela Jayawardene retired from the game recently. Mathews also has seven centuries and 23 half-centuries in the longest format with an average in excess of 51. Sri Lanka have not had a particularly good year under his captaincy in 2015 so far, having lost the home series against India and Pakistan. Live Cricket Scorecard: New Zealand vs Sri Lanka 2015-16, 2nd Test

They also lost the series against New Zealand, just ahead of the ICC Cricket World Cup 2015 and are already 0-1 down in this ongoing series as well. The only series win they secured was the recent series against West Indies. Sri Lanka blanked a clueless West Indies team 2-0. Mathews has however led from the front with the bat and has rescued his side on more than one occasion. He has the uncanny knack of picking up a wicket when his side needs it the most as well. Live Cricket Score, New Zealand vs Sri Lanka 2015-16, 2nd Test, Day 2 at Hamilton

Mathews also has 30 wickets in Tests to go with his 4,000 runs and he is Sri Lanka’s most dependable players at the moment. Others like Dinesh Chandimal, Dimuth Karunaratne are slowly starting to show their mantle in the longest format, but the entire team however revolves around their leader, Mathews. 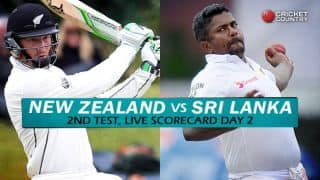