Mathews wobbled off the pitch midway through the first ODI

Sri Lanka may deal with a huge blow as skipper Angelo Mathews is a doubt for their second ODI against England at Birmingham. Mathews suffered the injury midway during the first ODI, and left the field. It would be a huge blow for the Sri Lankan team, who are aiming to put up a better show in the ODIs, after losing the Test series 2-0. Mathews was very instrumental in the first ODI, which ended in a tie. He scored 73, and took 2 for 22 before hobbling off the field. While no official statement has been given, a replacement will be called up should he fail to recover. FULL CRICKET SCORECARD: England vs Sri Lanka, 2nd ODI match

England and Sri Lanka played out a thrilling first ODI, which ended in a tie. Having been put into bat, the visitors managed to put up 286 for 9 in their full quota of 50 overs. Mathews was the star of the evening, scoring 73 of 109 to stabilize his team’s position. He was duly supported by Seekkuge Prasanna, who scored a blistering 28-ball 59.

In their reply, the hosts had a very poor start, losing six wickets for just 82 runs. But a 138-run partnership between Jos Buttler and Chris Woakes helped England get back into the game. By the time Buttler was gone for 93, the hosts were well and truly back. But Woakes stuck till the very end, staying not out at his career best 95.

In the final over, they needed 14 runs, and the equation came down to seven from a ball. Liam Plunkett remained calm and scored a six of the final ball to rescue his team. Plunkett was unbeaten at 22 of 11 balls. 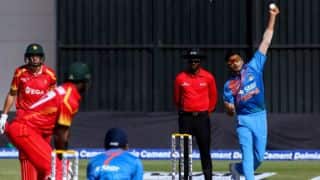