Six months ago, Angelo Mathews stepped down as Sri Lanka captain after Zimbabwe stunned Sri Lanka in the ODI series.

Six months ago Angelo Mathews had stepped down as Sri Lanka captain after Zimbabwe stunned them in the ODI series. In the meantime, Sri Lanka experimented with the captaincy, but no one could produce the desired results. Keeping in mind the 2019 World Cup, Sri Lanka have sorted back to their experienced player to take over the reins. Mathews has been reappointed as Sri Lanka s limited-overs captain. After stepping down from the captaincy, Mathews had mentioned he would not take up the responsibility again.

However, Chandika Hathurusingha has managed to do the unthinkable. The new coach convinced Mathews to lead Sri Lanka again. The SLC officials, who were involved in the discussions, confirmed the news to cricbuzz, Angelo agreed to take over the reins after Head Coach Chandika Hathurusingha convinced him. The selectors spoke to him on Monday after training and he will be announced as the new captain Tuesday morning.

Sri Lanka s experimentation with the captaincy involved as many as four players Upul Tharanga, Lasith Malinga, Chamara Kapugedara and Thisara Perera. Tharanga took over the mantle after Mathews stepped down. Under him, Sri Lanka suffered 5-0 whitewash against India.

Under Malinga and Kapugedara as well, Sri Lanka s limited-overs stars did not shine. During the Pakistan series itself, Perera was named the captain. Although he was decent with his bowling, he failed to bring pride for Sri Lanka as a captain. He was sacked from the captaincy duties last week.

Dinesh Chandimal was also in contention as he impressed leading the side in Tests. However, he failed to create an impact in ODIs since the Zimbabwe series. He has managed to score just a fifty in ODIs in 2017.

Mathews, too, had his share of hurdles. He missed plenty of ODI cricket due to ankle, hamstring and quadriceps injuries. He returned from the South Africa tour due to hamstring and went on to miss the Bangladesh series at home. He was excellent in the ODIs against India but missed the T20Is due to ankle injury during India tour. Before being handed over the captaincy duties, Mathews had to pass a fitness Test in Colombo.

On Tuesday, Mathews will sit with the SLC selectors to decide on the squad for Bangladesh tri-series involving Zimbabwe. He will also be addressing the media post the meeting with selectors.

The Bangladesh tri-series will begin from January 15. 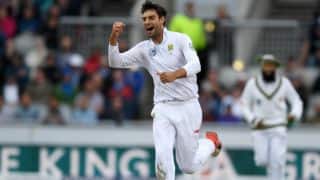