Angelo Mathews scored century in the third Test between India and Sri Lanka at Delhi.

Angelo Mathews scored century in the third Test between India and Sri Lanka at Delhi. This is his eighth Test century and third century against India. Mathews’ last century came against India in 2015 at Colombo, during Kumar Sangakkara’s farewell series. This was his first century in 19 Tests. Mathews’ knock has put the visitors in contention after a disappointing performance so far in the series. Sri Lanka drew the first Test and lost the next by an innings and 239 runs.

This is the kind of determined, controlled batting that Sri Lankan fans would have been waiting for. Not been easy for Mathews and Chandimal but have played like batting leaders should.

8th Test century for Angelo Mathews! standing up for the team like a warrior. innings of the highest class. scoring hard runs as usual. Batted @Angelo69Mathews . #INDvSL #SriLanka #LKA

He has ridden his luck but Angelo Mathews has hung in there and showed us why he has to be up the order for Sri Lanka.

Angelo Mathews will be a delighted man. His maiden Test hundred in India. Last time Sri Lanka toured India, he was run out for 99 having chanced Sachin Tendulkar’s arm. #INDvsSL

Congratulations to @Angelo69Mathews on a very fine 100. Showing his class against good bowling and in not so friendly conditions. Great stuff legend keep going. Sri Lanka is proud of you.

Though Mathews was dropped twice during his knock, the experienced batsman showed patience to revive Sri Lanka after early fall of wickets. Sri Lanka managed not to lose any wicket in the first session of Day Three, putting up 61 runs instead. Skipper Dinesh Chandimal completed his half-century while Mathews remained unbeaten on 90 as the teams went for lunch. Mathews took time to go past the nervous nineties and became the first Sri Lankan to score a century in the series. 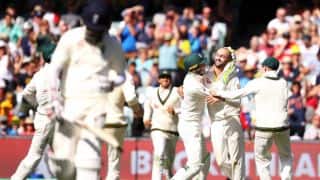