Mathews unbeaten on 79 as England look to clean Lankan tail.

Angelo Mathews‘ unbeaten 79 has taken Sri Lanka to 311 for seven at lunch with a lead of 203 runs on Day Four of second Test. The match is evenly poised with England needing three more to begin their chase. The session started off in Lanka’s favour before a harakiri post Mahela Jayawardene‘s dismissal saw England claw back.

Lanka started off confidently scoring at close to six an over this morning. There was not much movement on offer for pacers Chris Jordan and Liam Plunkett who opened the bowling on the fourth morning. As the batsmen settled in comfortably, England looked desperate for wickets. It was just about getting a couple of breakthroughs to stage a fightback as the Lankans were accumulating the lead.

With seven overs gone in the day, the new ball was available and the experienced pair of James Anderson-Stuart Broad were bowling in tandem. The Lankans held their fort. Anderson was a touch wide with the new cherry while the Lankans were defensive against Broad. The desperation for a wicket continued to mount when Ian Bell dropped a tough chance at gully. Jayawardene committed the error trying to have a go at a short one from Broad which flew to gully.

The Lankans were cruising along and their skipper once again made the difference. Mathews completed his 15th Test fifty. With a misfiring Lahiru Thirimanne in the middle-order, it was critical for Lanka to have someone to hold the innings after Sanga-Mahela combo. With the lead past 150, things looked ominous for the hosts. They finally managed to take a huge sigh of relief when Anderson struck with Jayawardene’s wicket. Anderson had hardly pitched it up with the new ball for the batsmen to drive and when he did it consistently, the first wicket of the day fell in his kitty.

The Lankans could’ve have easily piled on the pressure as the pitch had not much to offer for the pacers. All the hard work done upfront fell flat in a matter of deliveries as Lanka threw away the advantage conceding two wickets in two balls to Liam Plunkett. DInesh Chandimal looked in some unwanted hurry and holed out in the deep while Dhammika Prasad deemed it sensible to play an upper-cut towards Joe Root at thirdman. Suddenly, England were suddenly bowling with their tails up.

New batsman Herath somehow hung on as Mathews changed gears to go after the pacers. To the surprise of many, he even hit a six with a wild swing over midwicket. Left-handed Herath, who has a king pair in Tests, got off the mark after Stuart Broad misjudged a skier. The Lankans didn’t lose any more wickets till lunch and managed to take the lead past 200. 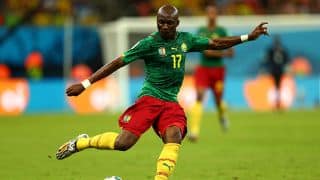