Despite being born in Australia, Angus like Sam wants to play for England at international level.

Leicestershire‘s Angus Robson hopes one day to have the same decision that confronted older brother Sam Robson because it means he will have made a success of his cricket career.

Sam, at 24, is two years older than Angus and like his brother, was born in Australia but a British passport holder thanks to their English mother, and chose England as the country he wanted to represent at international level.

And last week the Middlesex opening batsman made a maiden Test hundred against Sri Lanka at Headingley.

Angus is some way off making it into the international reckoning following several fifties for Leicestershire, but with a hundred still proving elusive.

But the younger Robson has a fresh opportunity to impress in Leicestershire’s tour match against India at Grace Road, weather permitting.

Rain put paid to the second day of three on Friday after India had declared their first innings on 333 for four on Thursday’s opening day.

But if conditions allow, Robson should get a bat on Saturday following scores of 75 and 81 for Leicestershire in their recent County Championship defeat by Surrey.

Angus Robson was with his parents, Jim and Rosamunde, in the crowd at Headingley to watch the early stages of his brother’s Test century.

Asked about choosing between England and Australia himself, he said: “If I keep doing well, which I hope I do, maybe in another few years I might be closer to having to make a decision like that.”

“I suppose it’s good I’ve got him (Sam) to talk to if anything like that ever does come up.”

And there’s no doubt his brother’s success has sharpened his own career ambitions.

“Absolutely. It’s obviously a long way off for me at the moment.  When you see it at such close distance, it only makes you more determined to do well. Maybe, one day …”

Robson was in London by the time Sam completed his century against Sri Lanka.

“Next day, we had to travel to The Oval — so I left when he was about 50 not out at lunch.

“I got to The Oval when he was 98 at tea. So then I saw him get a hundred, in the dressing room on television.”

He added: “I drove down with one of the other players, Greg Smith, and we listened to Geoff Boycott and all the commentators all the way there.”

But he said he was far from being the most excited of Sam’s immediate family.

“I think dad thinks it’s his century.  It was massive, and I’m very proud. You don’t really ever imagine it happening.” 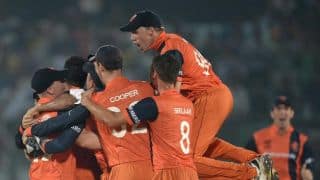