Anil Kumble has been appointed as India coach on a 1-year contract.

Bengaluru: He always led the country’s bowling attack from the front but Anil Kumble believes that as the new head coach of the Indian cricket team, his role will be in the “background” as it is the players who “come first”. “It’s a huge responsibility. I have always put my hands up for any sort of challenge. The coach’s role is in the background, it’s the players who come first. I am ready to take this role,” Kumble told mediapersons during interaction after BCCI officially made the announcement. The former captain and India’s highest wicket-taker Kumble was named the team’s head coach for a one-year tenure. “It’s a great honour to be back in Indian dressing room in a different role,” Kumble said on his appointment.READ: Anil Kumble appointed Indian cricket team’s head coach

Asked about his plans for the team, he said, “Strategy will be to win. There is still time to think about all that and sit with the players. I have a short and long-term plan for the upcoming series [against West Indies], but I cannot plan alone; I also need players to pitch in.” READ: Kumble named India’s head coach: Twitter reactions

The selection of the coach was made based on the recommendation by the Cricket Advisory Committee comprising Tendulkar, Ganguly and Laxman.

“This is a great time for Indian cricket. I have played for long with Sourav, Sachin, VVS and Rahul is also guiding the junior team. The five of us share wonderful relation on the field and off it as well. I am looking forward to working with them,” Kumble spoke fondly of the ‘Golden Period’ of Indian cricket.

“Need to sit down with Sourav, Sachin, Laxman and Dravid and need to do what is best for Indian cricket.” The 45-year-old Kumble pipped former Team Director Ravi Shastri, Australians Tom Moody and Stuart Law and a host of others to clinch the high-profile position following an elaborate selection process headed by a three-member Cricket Advisory Committee (CAC). READ: BCCI to decide on support staff for Kumble soon

“I spoke to my family and they supported my decision. I have travelled for almost 18 years [as an international cricketer] and it is not going to be easy as we will be travelling a lot.

“Yet I feel it’s the right time be again part of the Indian dressing room and give back to the sport.” Kumble, the highest wicket-taker for India till date and third in the international Test list behind Muttiah Muralitharan and Shane Warne, emerged as a front-runner in the last few days even though he has no formal experience in coaching in the international arena. READ: BCCI has complete faith in Anil Kumble, says Anurag Thakur

Kumble’s wife Chethana Ramatheertha said: “We will miss him, but very happy as Indian team can’t find such a loyal coach.” 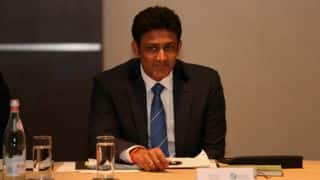