Anil Kumble says that inculcating the household qualities or respect and admiration in the Indian society will be one of the key factors.

Recently appointed Indian coach Anil Kumble has revealed that among his plans with the Indian national cricket team is to develop an Indian way culture, which will create a certain image of the team. Kumble has taken up the role of India s head coach for tenure of one year that includes plenty of Test cricket, and the former Indian captain wants to instill qualities in the team that represents the country and the society. Kumble says that inculcating the household qualities or respect and admiration in the Indian society will be one of the key factors of this new culture that he wishes to develop. ALSO READ: Anil Kumble reveals story behind nickname Jumbo

In an interview with the Hindustan Times, Kumble said, It is important we create an Indian way. And what is that Indian way? What do we want to achieve? We want to put across certain messages which they embrace.

Kumble, who enjoyed a very successful run as a player under the tutelage of John Wright, said he wants to plan ahead for the Indian team. He said, Obviously John had made an impression with the kind of effort he brought to the team, organising the team itself. Earlier it was all ad hoc, there was no plan to the certain decisions we took as a team. ALSO READ: Anil Kumble says consistency will be great challenge for India Test cricket

He continued, I am someone who likes to plan. I need to plan for a week. I need to know what the next week looks like. And that is exactly what I would do with this team as well. OK, this is the first week of activities we have planned for the West Indies, or whatever else we do. You can also structure what you need to do in terms of planning meetings. Those are very important for team environment.

The last thing you want is an unhappy person in the team because it is not good to force something upon someone against his wishes. That is what we want to achieve as a team. What makes them tick what does not make them tick. I am new to this. I am an outsider who has just come in and it is great to be part of the Indian squad, Kumble explained.

Elaborating further on the Indian way , the Indian coach said, Well, I said earlier I don t want to force something upon them like a schoolmaster. Whether it is discipline or whatever you want from the team. That may work in some cases but not always. You want the team to embrace what they want to do.

I did mention how many times do they want to train, or when not to train, what are the things they will commit to, as an individual and as a team, irrespective of the results how do you want to approach your own game and how do you want an Indian team to be looked at? Results will be the next step, he added.

Kumble said developing respect for each other among players remain one of the core objectives, adding that sledging is something which cannot be put on any specific country.

I don t mean to say sledging is not Indian culture or is somebody else s culture. What I meant was you would want to bring a feeling of Indianness, that is extended family, respect for one another. And the best practices in the Indian family would be, generally, follow whatever elders say, but here we want to be a bit more open and express our views even if they differ from that of the seniors, Kumble explained.

He added, Here it is having family values and say, if a senior has taken a decision, I will follow it. However, you should also have the freedom to disagree but in a more civilized way, where everyone has the opportunity to express himself. In the end, it is all about inclusiveness. It is important that you include everyone in the decision-making. Only then you can bring in ownership. 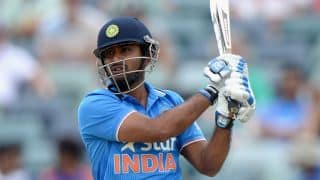