Anil Kumble has stepped down as the chief mentor of Mumbai Indians (MI) with immediate effect.

Mumbai: Spin great Anil Kumble has stepped down as the chief mentor of Mumbai Indians (MI) with immediate effect. Kumble, who has been associated with the Indian Premier League (IPL) franchise since January 2013, has decided to pursue other opportunities in sports and cricket. “Mumbai Indians is grateful to Anil Kumble, India s highest wicket taker in both Tests and one days for his contribution in strengthening the Mumbai Indians Franchisee. In his first year as the Mentor, Mumbai Indians won the IPL and the Champions League in 2013. Mumbai Indians won the IPL once again in 2015,” said the team in a statement. Sachin Tendulkar, Rahul Dravid, Sourav Ganguly and others in one rare picture

Kumble, on his part, said, “I sign off with the obvious satisfaction of moulding a set of brilliant individuals to a high performing unit. Over the 3 years, MI met unprecedented success winning the IPL twice and the Champions League once. Winning both trophies in the same year [2013] being our crowning glory. As I move on to pursue other interests around cricket, I shall be amiss if I do not express my deep sense of appreciation to The Ambani family, particularly Smt. Nita Ambani, Akash Ambani and Nikhil Meswani for their unstinted support and empowerment. The players and my support team [coaching and non- coaching staff] have been an admirable bunch and were a joy to work with. Finally, I thank the MI fans for their constant support,” added the former India captain. Sourav Ganguly replaces Anil Kumble as BCCI Technical committee Chairman 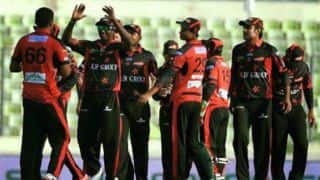