A statue of India’s first-ever Test captain Col C K Nayudu  was unveiled by former skipper Anil Kumble  at Machilipatnam town near here today. “I am privileged to unveil Col Nayudu’s statue in his hometown. Nayudu was a great cricketer who laid strong foundations for the development of the game in India,” Kumble said on the occasion.

The ace leg-spinner also laid the foundation for the construction of the Masula Sports Complex and Athletics Stadium, being built on a 13-acre site at a cost of Rs 15 crore. Speaking on the occasion, Kumble hailed the state government’s initiatives aimed at developing sports infrastructure and nurturing talent.

“Chief Minister Chandrababu Naidu has taken steps to ensure that every child in Andhra Pradesh has access to sport, gets trained, gets nurtured so that they all become future Olympians of our country. I am only hopeful that some day, someone from this crowd will go on to bring laurels for India in Indian sport,” he said.

“Hopefully, in a years time we will see the stadium buzzing with activities and all the children will be playing there,” Kumble said. State Youth Affairs and Sports Minister Kollu Ravindra and Sports Authority of Andhra Pradesh Chairman Ankamma Chowdary were also present. 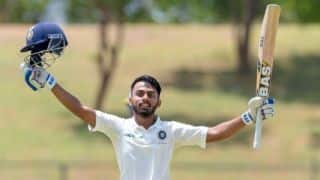