A measured – by Twenty20 standards – 64 from Srikkanth Anirudha paved the way for Chennai Super King’s 153 for 4 against a rejigged Kolkata Knight Riders in the IPL 4 opener in Chennai. A measured – by Twenty20 standards – 64 from Srikkanth Anirudha paved the way for Chennai Super King’s 153 for 4 against a rejigged Kolkata Knight Riders in the IPL 4 opener in Chennai. Aniruddha featured in stands of 75 and 49 for the second and third wickets respectively, but the innings tapered off once MS Dhoni was dismissed.

The early loss of Murali Vijay, chipping to mid-on off Iqbal Abdulla in the opening over, did little to deter CSK. Aniruddha, promoted to open the innings, was given a life when Yusuf Pathan dropped a return catch and proceeded to make KKR pay for the reprieve. Jacques Kallis was taken for three boundaries in his opening over, after which Sarabjit Ladda was charged and driven for a straight six.  This was the cleanest hitting seen by Aniruddha over three seasons, even if he was given two lives.

Raina, also dropped on 11 by a juggling Pathan at mid-on, rode his luck to play some lovely inside-out drives off the spinners over extra cover. As Rajat Bhatia and L Balaji slowed the run rate down with a clever mix of cutters and changes of length, Raina dabbed and nudged the ball around to keep runs ticking over during a 75-run stand in 9.3 overs. His innings came to an end when he slog-swept Pathan out to deep midwicket.

That brought to the crease MS Dhoni, whose presence raised a loud cheer from the Chennai fans. Immediately Dhoni was away with some big shots, forcing Aniruddha to follow with a slogged six off Ladda. Dhoni’s 21-ball 29 injected some oomph into the innings, but his dismissal, caught behind off Kallis, allowed KKR to finish with damage control. Balaji was frugal, allowing just two boundaries in his quota, Kallis finished off Aniruddha with a yorker but the last four balls of the innings went for 15, leaving CSK with belief that may have enough on the board. 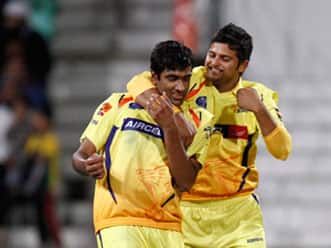