Anurag Thakur: Would like to thank voters of Chandigarh for voting in favour of BJP

Anurag Thakur: Would like to thank voters of Chandigarh for voting in favour of BJP

Chennai: Bharatiya Janata Party (BJP) MP and Board of Control for Cricket in India (BCCI) president Anurag Thakur thanked the people of Chandigarh on Tuesday for voting for the BJP, and suggested that the country is backing Prime Minister Narendra Modi to make India Congress free. Anurag Thakur told ANI, I would like to thank the voters of Chandigarh for voting in favour of BJP. Our work in ten months was much more impressive than what the Congress did in 14 years and the people voted us for that. Thakur further said, As far as demonetisation is concerned people like Rahul Gandhi who said should he speak, there will be an earthquake, they have gone underground. That clearly shows that the people of the country stand with Prime Minister Modi for this change, to make this country corruption free , black money free and Congress free.

BJP MP and television actress Kirron Kher said, I thank the people of Chandigarh that they have realised that we have conducted their work. We are standing with them by staying here day and night, we have done a lot of work for them. We have implemented all the schemes made by the Prime Minister Narendra Modi and will implement consistently..that s why the people of Chandigarh have supported PM Modi.

She further said demonetisation has not impacted elections in Gujarat, Maharashtra and Chandigarh. Everybody knows that there will be problems for sometime…this is an anti-corruption move..people understand..they are very sensible. she added. The BJP-SAD alliance has won 21 municipal seats out of a total 26 seats up for grabs.

The Congress won four seats while one seat was won by an Independent. The party secured 17 of the 26 seats. The Congress party could secure only four seats. In the recently-concluded by-polls, many states like Madhya Pradesh, Gujarat, Rajasthan and Maharashtra which were held after demonetisation, people voted the BJP to victory and expressed their confidence in Prime Minister Narendra Modi. 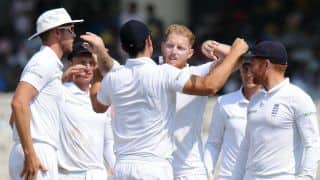 India vs England, 5th Test, Chennai: England’s marks out of 10