Balkh Legends made it to the semi-final of the Afghanistan Premier League with a huge 89-run win over Paktia Panthers.

Balkh Legends made it to the semi-final of the Afghanistan Premier League with a huge 89-run win over Paktia Panthers. The Legends were powered to 195 for 8 through Ryan ten Doeschate’s half-century, after which they bowled admirably to bowl out Panthers for a meagre 106 with England allrounder Ravi Bopara taking 3 for 17.

The Legends lost Chris Gayle cheaply for 12, but Colin Munro’s little assault brought up the half-century in the seventh over. Munro, having scored four boundaries and a six, was then dismissed by Sikander Raza as Legends were unable to push the scoring rate. From 50 in 6.3 overs, their scored read 73 after 10. However, it was their middle order that brought Legends back in the game with Darwish Rasooli scoring a 28-ball 44 with three fours and two sixes.

Rasooli was dismissed by Azmatullah Omarzai but by then he had set the platform for ten Doeschate to take over. Bopara partnered the Dutch player to add 45 off 28 as the Legends collected 128 in the final 10. They launched an all-out assault, particularly on Yamin Ahmadzai, whose last two overs cost 41 with six sixes.

In reply, Mohammad Shahzad and Rahmanullah Gurbaz started well for the Panthers, adding 31 inside three overs before Aftab Alam struck to remove the Pakistan batsman. His dismissal, however, had no bearing on Gurbaz’s approach, who tonked four sixes to score 33 off 22. His dismissal meant that Panthers were three down for 69, after which Legends triggered a middle and lower order collapse.

Bopara led from the front as the Legends pulled things back in the middle overs. Qais Ahmed and Mirwais Ashraf maintained the pressure along with Bopara. From 72 for three, they slipped to 77 for seven with Raza, Calum McLeod and Samiullah Shenwari falling cheaply. They picked up wickets in regular intervals to prevent Panthers from attaining any kind of momentum and bowled them out inside 16 overs. 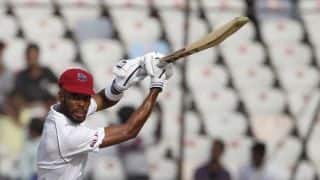 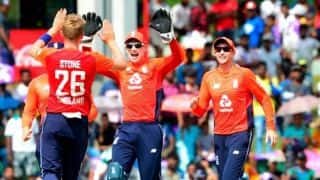 I don’t think you can disregard Olly Stone from World Cup: Eoin Morgan