Arjun Tendulkar remained wicketless in the first innings, but came back strongly in the second to claim 5 for 44.

Former Indian great, Sachin Tendulkar‘s son Arjun Tendulkar once again contributed with the ball in Mumbai’s innings victory over Railways in ongoing U-19 Cooch Behar Trophy. Earlier, Arjun had picked up a five-wicket haul against Madhya Pradesh three weeks ago, followed by a four-for against Assam. Arjun had remained wicketless in the first innings, with 0 for 23, but came back strongly in the second to claim five wickets. The match was being held in the Sachin Tendulkar Gymkhana in suburban Kandivili.

Arjun, a left-arm pacer, grabbed 5 for 44 in 11 overs and assisted Mumbai in dismissing Railways cheaply, for 136 to win the match by an innings and 103 runs. Electing to bat, Mumbai posted 389 riding on a double-century by Yashavi Jaiswal. In reply, Railways were bowled out for 150 with Vashishtha taking 8 for 30. Arjun missed out on the final innings, but made sure to have the last laugh in the second.

Arjun dismissed the first four, and claimed the ninth wicket to complete a five-for. 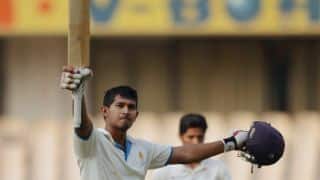