Arjuna Ranatunga and Aravinda de Silva have denied the allegation made by former Sri Lanka Cricket (SLC) chief Thilanga Sumathipala that they had accepted USD 15,000 from an Indian bookie to throw games.

Former captain Arjuna Ranatunga and his 1996 World Cup winning team-mate Aravinda de Silva on Tuesday denied the allegation made by former Sri Lanka Cricket (SLC) chief Thilanga Sumathipala that they had accepted USD 15,000 from an Indian bookie to throw games in 1994.

Sumathipala had alleged that Ranatunga and de Silva were the first Sri Lankan players to have been charged of match fixing. He said he was blamed for hushing up investigations.

“If I was someone to fix matches, why did he (Sumathipala) have me in his Cricket Committee?” asked de Silva, who had served the SLC under Sumathipala’s presidency in the past.

De Silva said he did not take the allegations seriously.

Sumathipala had said de Silva had been paid USD 15,000 by an Indian bookmaker to lose the Lucknow Test of 1994. Sri Lanka lost the match by an innings and 119 runs.

“Not 15,000 dollars, but we could have made 15 million dollars if we threw the World Cup,” Ranatunga said, adding they never played for money but were committed to the game and upholding the honour of the country.

Sumathipala was reviving a decades-old accusation. In 2001, both Ranatunga and de Silva were cleared of the fixing charges by a committee headed by legal luminary Desmond Fernando. 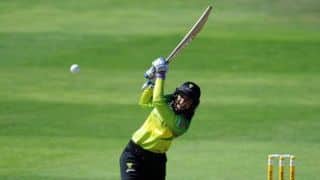