On August 6, 2016, Akram's Mercedes was shot at on Karachi's Karsaz Road while the former ace bowler was on his way to the National Stadium Karachi to conduct a training session for young bowlers.

Islamabad, Jan 10 (IANS) A local court in Karachi on Tuesday issued an arrest warrant against former star cricketer, Wasim Akram after he failed to appear before the court during last 31 hearings of a case. Akram himself had lodged the case in August last year at Bahadurabad police station against Major (retd) Amirur Rehman and others. The court issued a bailable warrant against Akram and asked him to appear before the court on January 17, Dawn reported. On August 6, 2016, Akram’s Mercedes was shot at on Karachi’s Karsaz Road while the former ace bowler was on his way to the National Stadium Karachi to conduct a training session for young bowlers.

The shooting incident took place after Akram got into a minor car accident. Following the mishap, the former Pakistan cricket captain had asked the driver to pull over. A heated discussion had ensued and the suspect, who was sitting in the back seat, came out of the car and fired a shot which hit Akram’s vehicle.

Later, after filing the case against him, Major Rehman had managed to get pre-arrest bail from the court. Subsequently, he also wrote a letter to the legendary cricketer, seeking pardon unconditionally.

Akram has represented Pakistan in 104 Tests and 356 One-Day Internationals (ODI) in a career lasting over 18 years. He has 414 wickets in Tests and 502 wickets in ODIs. He was no mug with the bat either, scoring well over 3,000 runs in the shorter format and close to the 3,000-run mark in the Test arena. Akram s highest score in Tests is 257 not out, which he scored against Zimbabwe in 1996. Akram after his retirement has taken up commentary as a full-time job and will look to continue that in the future as well. He was recently seen during the World Cup, where he would give his opinion on the matches. In 2013, Akram got married to his long-time partner Shaniera Thompson, who is an Australian 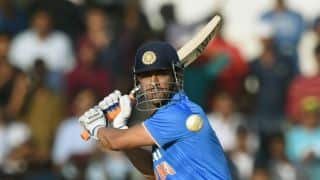 CAB to felicitate MS Dhoni during Eden ODI against England