The Sri Lankan side is already under pressure against India after trailing the three-Test series 1-0, following the innings defeat in the second Test.

Sri Lanka are already under pressure against India after trailing the three-Test series 0-1 following the innings defeat in the second Test at Nagpur. To make things worse, there have been quite a few injury concerns. The biggest of these was Rangana Herath, who has flown home with a bad back. Lahiru Thirimanne s form has also been questioned owing to his poor performance of late, while some feel that he does not possess the same temperament as he did in the past. Thirimanne has been on a spree of dismissals, mostly due to poor shot selection. Team manager Asanka Gurusinha feels Thirimanne can be dropped from the third and final Test at Feroz Shah Kotla, Delhi, starting Saturday. FULL CRICKET SCORECARD: India vs Sri Lanka 2017-18, 3rd Test at Delhi

On Thirimanne and batting at No.3

It is to me the most important position in the batting order No. 3. Sometimes you walk in the first over or you stay in the dressing room for two or three sessions. The mental switch that you have to do between certain scenarios is huge. It is affecting us. It is a lie if we say no. Thiri played some very bad shots in the last game which he shouldn t have. You said the word temperament and that is lacking, said Gurusinha exclusively to Cricbuzz.

The biggest issue that we are having is that we are not batting three or four sessions. That s where we are struggling. If you are going to get 400 runs in an innings, you need at least one guy to bat long. That was one reason why we won against Pakistan as we scored 400-plus and batted for more than 150 overs. Ashwin not as attacking off-spinner as Harbhajan, says Hayden

Young guys who are coming into the Test squad are playing too much T20 cricket. Even schools are playing T20 tournaments. In three day games, they keep playing all these shots and get away, but Test cricket is Test cricket. The name says it all. It tests your mental toughness and your skill. That s what we are lacking at the moment.

I was talking to a couple of people in Indian coaching staff and it is their Ranji Trophy which is quite strong. You take Ranji Trophy: there are big scores in every game. Even though they play IPL, all players need to go back to Ranji Trophy and perform.

Everyone is talking about Jasprit Bumrah, the T20 bowler. He is playing Ranji Trophy and is amongst wickets. I think India has told him that we are interested in you playing Test cricket, but you ve got to go back and prove it to us. What IPL has done is to give so much talent. But they are harnessing in so many areas, one-dayers and Tests and building on that. I would love to have a scenario where we have to drop or rest someone and the replacement is someone who averages 50 in Tests. 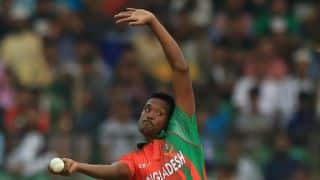