"In Afghanistan, the brilliant thing is that a lot of the young talent that is coming through are spinners"

Afghanistan team are on a roll after whitewashing Bangladesh in the three-match T20I series. They will now take on India in Bengaluru for their maiden Test. Along with Ireland, Afghanistan had been elevated to Test status in June 2017. Ireland played their maiden Test against Pakistan in May, at Malahide. They fought hard, with Kevin O’Brien registering a hundred. Now Afghanistan, up against the No. 1 Test side, are high on confidence as well.

“The whole world knows that [we have very good spinners in] Rashid Khan, Mujeeb [Zadran]. [Mohammad] Nabi, Rahmat [Shah], Zahir [Khan],” Afghan captain Asghar Stanikzai told ESPNcricinfo. “In Afghanistan, the brilliant thing is that a lot of the young talent that is coming through are spinners, because they all follow Rashid, they follow Nabi, so because of that our spin department is very strong from below. In my opinion, we have good spinners, better spinners than India.”

The Afghanistan Test squad includes spinners like Rashid, Mujeeb and Nabi who have played in the IPL. They have also included Chinaman bowler Zahir and left-arm orthodox spinner Amir Hamza.

It is clear that Afghanistan heavily rely on their spin bowling and it would be no different in the longest format of the game as well. Mohammad Shahzad believes that spinners will trouble Indian batsmen. It will indeed be tough for both the sides.

“It can definitely happen. You know what our spinners have been doing of late. Ireland played their [first Test] match against Pakistan, in Ireland’s conditions, and gave them a tough time. We are coming here and playing in India’s conditions, and that too against a team that plays spin very well. We will have a tough time, for us and for them too. It won’t be easy for either team. It will be a good match, Inshallah,” said Shahzad. 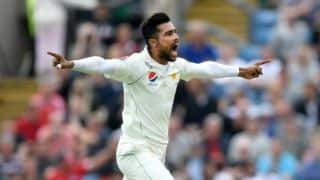