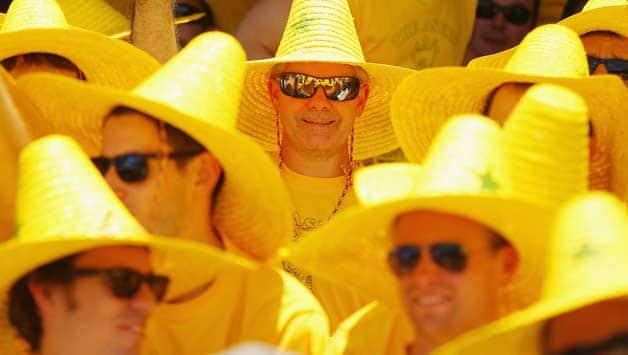 Security guards spotted the animal wrapped in a towel and transported in a baby harness during the first day’s play between England and Australia on Thursday.

The Australian Associated Press reported that the pig’s snout was taped shut so it couldn’t squeal.
The RSPCA animal charity was handed custody of the distressed pig, called Ash and weighing 10-12 kilograms (22-26 pounds).

“There were thoughts it might not survive the night,” RSPCA spokesman Michael Beatty said.

“It was really stressed out and dehydrated when it came in last night. It’s just laying in a corner and not moving. It is not a happy pig at all.”

“Ash” was believed to be a four-five month old domestic brown dwarf pig. Police would not speculate on whether the pig was destined for release onto the playing field.

The Sydney Morning Herald suggested that Ash was destined to run onto the Gabba field, three decades after a pig was famously smuggled in and freed with the names Botham and Eddie painted on its sides.
All-rounder Ian Botham was the scourge of Australian cricket and Eddie Hemmings an offspin bowler touring with England in the summer of 1982-83.

The newspaper speculated if Ash had Stuart Broad’s name written on it. The English fast bowler has been vilified in Australia for not walking during the recent Ashes series in England, but he silenced the boos at the Gabba by taking six wickets in Australia’s first innings.

The unnamed owner of Ash was to appear in the northeastern city’s Magistrates Court on December 12.