Australia need only 201 runs to win the fourth Ashes 2013-14 Test against England at the MCG.

Australia won by 8 wkts
Man of the Match: Mitchell Johnson

An abject batting display from England gave Australia the upper hand to win the fourth Ashes 2013-14 Test at the Melbourne Cricket Ground (MCG) on December 28, 2013. England lost their last five wickets in the second innings for only six runs in 40 deliveries.

England were bowled out for a paltry 179 leaving Australia to chase a relatively easy 231-run target to chase. At stumps on Day Three, Australia were at 30 for no loss. Chris Rogers (18 not out) and David Warner (12 not out) were at the crease.

The post-tea session began with England 115 for four and leading Australia by 166 runs. Peter Siddle bowled short and wide delivery and Kevin Pietersen cut it for a four through point. Siddle then bowled one on the pads and Pietersen flicked it to the right of mid-wicket. The ball just stopped inside the boundary line and the batsmen ran three.

Ben Stokes then flicked one off the hips towards deep mid-wicket and got three runs. Stokes came down the track to Nathan Lyon and tried a lofted drive over deep mid-off, but hit it straight to Steven Smith positioned there.

Siddle found the outside edge of Pietersen’s bat, but the ball bounced in-between second and third slip and raced away for a four. Jonny Bairstow came down the track to Lyon and hit a six over long-on to get off the mark. The six distance was measured at 94 metres.

Siddle bowled one short to Pietersen again and he pulled over the two mid-wicket fielders for a four. He then drove Siddle past the extra-cover fielder for another four in the over. That brought up the 150 for England.

The partnership between Pietersen and Bairstow helped England to get the score ticking faster. Bairstow leaned forward and lofted Lyon for another six over straight long-on. Bairstow then swept Lyon for a four towards deep backward square-leg.

Ryan Harris got one to move away from Bairstow and found the outside edge of the bat. The ball went in-between third slip and gully for a four. Johnson bowled three deliveries down the leg side to Pietersen. Then as he is neared his bowling mark, Pietersen walked away pointing to the sight-screen. Johnson angrily threw the ball to the slips and exchanged words with Pietersen.

Next ball, Pietersen flicked the ball towards deep mid-wicket and took a single. While running, Johnson had a few more words with Pietersen, who also gave it back to the bowler. The umpire did defuse the tension a bit. The MCG crowd loved the confrontation.

The wind also picked up speed and there were a lot of plastic bags flying around the ground. The umpires also called for a heavier set of bails to prevent them from falling off the stumps.

Mitchell Johnson bowled a full delivery outside off-stump and Bairstow played at it without much feet movement. He only manage to edge it to Brad Haddin behind the wickets. That sixth-wicket partnership was worth 42 runs.

Tim Bresnan was the next to go as he got an inside edge off a pull to Lyon and got bowled for a duck. Three deliveries later, Stuart Broad edged a turner to Michael Clarke at first slip. That was Lyon’s 100th wicket in Test cricket.

James Anderson took a single off Lyon towards short fine-leg. Pietersen then tried to launch Lyon out of the MCG, but miscued the shot. Harris took a good catch at long-off. That was the fifth wicket for Lyon in the innings. Johnson then got Monty Panesar out LBW for a duck.

England were all out for 179 and the target for Australia was 231.

Australian openers began the runs-chase positively playing their strokes. Both Rogers and Warner got a four each and ran well between the wickets. As stumps were called on Day Three, Australia needed only 201 runs to win the fourth Ashes Test. 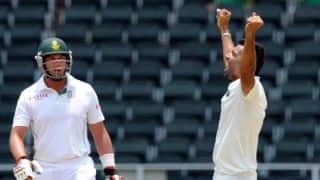 Why not start a Test innings with the old ball?