Australia compounded further misery on England by beating them with an eight-wicket margin to win the fourth Ashes 2013-14 Test at the Melbourne Cricket Ground (MCG) on December 29, 2013. The Aussies, who had already won the Ashes, have taken a 4-0 lead in the five-match series.

They chased down a 231-run target with ease in only 51.5 overs in their second innings. Chris Rogers starred in the run-chase as he scored 116 off 155 balls. He struck an astonishing 13 fours in his innings. Shane Watson was unbeaten on 83 off 90 balls. He hit 11 fours and also the winning runs.

The session started with Australia already at 143 for one on Day Four. Stuart Broad bowled the first over after lunch, Watson leaned forward to a full delivery and drove square on the off side for three runs. Broad then found the edge of Rogers’s bat and wicketkeeper Jonny Bairstow dived to his left and dropped a very tough chance.

Rogers then drove one past the cover fielder and got a four. With that shot Rogers got to his second Test century. Both have come against England. The first was in the fourth Ashes 2013 Test at Durham. This was at the MCG in front of his home crowd in Victoria. All the fans at the ground gave a warm round of applause to Rogers.

Watson then played a cut shot off Tim Bresnan for a four behind point. That got him to his 22nd Test half-century. The next ball, he thumped it straight over Bresnan for another four.

Rogers kept getting a lot of runs and fours towards the third-man region. Just as it seemed Rogers would be there at the end, he edged a Monty Panesar delivery to Bairstow.

Michael Clarke was the new man in and he got to 8,000 runs in Test cricket with a four towards backward-point. He is the sixth Australian batsmen to reach the milestone.

But there were not many more hiccups and Watson struck an array of fours and hit the winning runs off Panesar. Australia took a 4-0 lead in the five-match series. Mitchell Johnson was the Man of the Match for taking a combined eight wickets in both innings. He had taken five wickets in England’s first innings and three in the second. The fifth Ashes 2013-14 Test will be played in Sydney and will start on January 3, 2014. 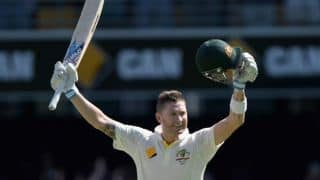