England 226 for six at stumps on Day One of the fourth Ashes 2013-14 Test against Australia.

Despite Kevin Pietersen’s valiant half-century, England entered stumps on Day One at 226 for six in the fourth Ashes 2013-14 Test at the Melbourne Cricket Ground (MCG) on Boxing Day. Pietersen is batting on 67 and Tim Bresnan is on one. Mitchell Johnson and Ryan Harris have taken two wickets each for Australia.

On a day when the MCG saw a world record attendance of over 91,000 people, Michael Clarke won the toss and elected to bowl first. The post-tea session began with England at 135 for three. Nathan Lyon dragged one short and Ian Bell rocked back onto his back-foot and pulled it away for a four through square-leg. Pietersen then swept Lyon behind square on the leg side and that brought up England’s 150.

Lyon was bowling from round the wicket to both the right-handed batsmen. Bell was unable to get him away on the off side as Clarke had employed a tight field. Bell did get one in-between short cover and point for two runs.

Slowly Pietersen started getting some runs against Peter Siddle. He flicked twice to get two twos. To counter that, Siddle was angling it into Pietersen from wide of the stumps at the non-striker’s end.

Bell too started getting runs, especially against Lyon through a few flicks on the leg side. Everytime they were cutting on the off side, they found the fielders. Pietersen then hit one hard to mid-off and took off. He dived to complete the single as the throw just missed the stumps.

Bell’s stay in middle was then shortened by Harris. The bowler bowled a length delivery that moved after pitching and Bell was rooted to his crease and poked at it. The ball took the edge of the bat and Brad Haddin took the catch behind the wickets.

England’s lone centurion in the series, Ben Stokes, was the new batsman in. Pietersen then got his second piece of luck on Boxing Day. Harris bowled a short delivery and Pietersen pulled it to George Bailey at short mid-wicket.

The ball travelled quickly, but Bailey got both hands to it and fumbled. He juggled a few times before the ball dropped away from him. It seemed like Pietersen swallowed a fly at the MCG right after that and that caused him some discomfort. But he actually felt nauseous.

Next ball, he pulled one over the wide mid-on region for a four. There was a break in play as the England team physio had to tend to Pietersen’s problem. Stokes got off the mark with a push towards mid-on off Lyon. Pietersen got to his 35th Test half-century with two off Siddle.

Lyon dragged another one short and Stokes drove off the back-foot to get a four through the covers. Next ball, he came down the track and lofted Lyon for a six down the ground. The new ball was taken after the 80th over.

Johnson bowled the first over with the new ball and he struck on the fourth delivery. The ball was pitched on a good length and it moved away slightly. Stokes (14) was stuck in his crease and he edged it to Shane Watson at first slip.

Jonny Bairstow was the next man in. He top-edged a hook to a Johnson bouncer and got a six behind the wicketkeeper. Two balls later he was bowled by Johnson for 10. Bresnan survived the final few overs as stumps were called. Australia definitely had the better day as they came back to take a few wickets in the end. 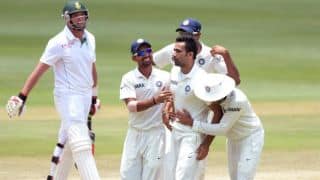 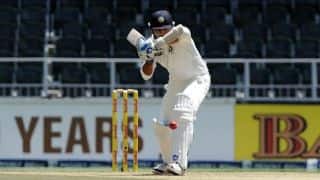