England are at eight for one at stumps on Day One of the fifth Ashes 2013-14 Test.

England are at eight for one at stumps on Day One of the fifth Ashes 2013-14 Test against Australia at the Sydney Cricket Ground (SCG). They trail Australia by 318 runs after they were bowled out for 326 in their first innings. Steven Smith (115) scored a magnificent century and Brad Haddin (75) contributed with a quick-fire innings. Ben Stokes took six wickets for 99 runs.

Alastair Cook is batting on seven and James Anderson is on one. Michael Carberry was the only wicket to fall for England on Day One for a duck.

The post-tea session began with Australia at 201 for five. The flow of runs from the afternoon session continued into the final session on Day One. Smith played a square drive off Stuart Broad and got a four. That was also his half-century.

Haddin then lofted a length delivery from Stokes over mid-off. A few deliveries later, he hit another delivery for a four this time over Stokes. Haddin then pulled Broad for another four wide of mid-on. Stokes finally got the breakthrough that England were looking for.

He pitched the ball outside off-stump at a fuller length. Haddin was rooted to his crease and edged it to Cook at first slip. Mitchell Johnson was the new batsman in and he got a barrage of short deliveries from the England bowlers.

Stokes bowled a good length delivery and Smith played it late but hard past the gully fielder and got a four. Smith was getting more confident and was shown with a text-book cover drive off Anderson in-between mid-off and cover for a four.

Boyd Rankin was back on the field after pulling up with a hamstring strain and began an over. But again after the first ball, he pulled up again. He was back into the dressing room for more treatment. Stokes bowled a full delivery and Smith hit through the line of the delivery and over mid-off for a four.

Smith hit one from Anderson through mid-on for a four. Scott Borthwick was brought back into the attack. He bowled a beautiful leg-spinner to Smith. He drew him in forward and pitched just on off-stump on a good length. The ball turned away and Smith was beaten. Broad then bowled a back of a length delivery outside off-stump and Smith opened the face of the bat to get a four behind point.

Borthwick then got his first wicket in Test cricket as Johnson hit one high in the air. Substitute Joe Root took the catch at long-on. Smith then launched Borthwick for a six over long-on to get to 99. Next ball, Borthwick bowled a full-toss and Smith pulled that over mid-wicket for a four. That was his third Test century and all have come against England.

Smith then pulled another full-toss from Borthwick for a four through mid-wicket. By this time, Ryan Harris was throwing his bat at everything. He also probably played the best shot of the day. Anderson bowled a back of a length delivery and Harris pulled that well into the stands for six over mid-wicket.

Harris soon departed as he played an uppish drive off Stokes straight to Anderson at short cover. Peter Siddle was the next batsman and he edged the first ball he faced to wicketkeeper Jonny Bairstow behind the wicket. That was Stokes’s first five-wicket haul in Test cricket.

Nathan Lyon survived the hat-trick ball. He then edges one to Anderson at gully, but he dropped a tough chance to his left. Smith then hit one to Root at mid-on and that was the last wicket to fall for Australia. Stokes had taken a career high six for 99.

England’s innings commenced Carberry was the only wicket to fall. He got a short delivery at chest height from Johnson and he glanced it to Lyon at leg-slip, who took a stunning catch diving to his right. Anderson came in at nightwatchman and was unbeaten at the end of the day’s play. England trailed Australia 318 runs. 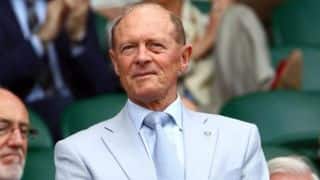