Live score from Day Two of the fourth Ashes 2013-14 Test between Australia and England at the MCG.

The fourth Ashes 2013-14 Test between Australia and England began on Boxing Day December 26, 2013 at the Melbourne Cricket Ground (MCG).

Australia captain Michael Clarke has won the toss and elected to field first. England were at 226 for six at stumps on Day One of the fourth Test. Kevin Pietersen was batting on 67. Mitchell Johnson and Ryan Harris had taken two wickets each. 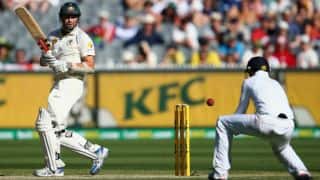