Australian skipper Michael Clarke insists there is no animosity with England despite the final day of the first Test turning nasty with tailender James Anderson told to expect a broken arm. 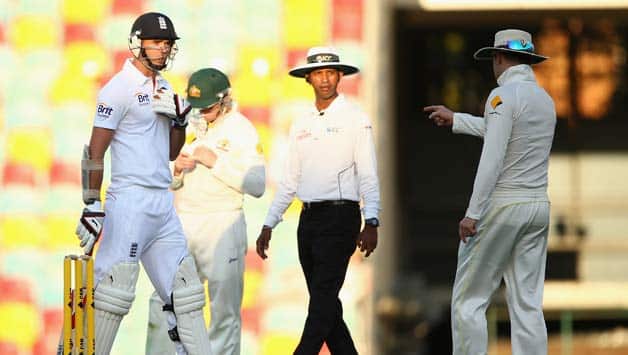 Australian skipper Michael Clarke insists there is no animosity with England despite the final day of the first Test turning nasty with tailender James Anderson told to expect a broken arm.

The home team’s huge 381-run victory on Sunday was tarnished by constant sledging as frustrations boiled over, culminating in Clarke being caught by a stump microphone telling Anderson to “get ready for a broken fucking arm”.

The media lapped up the tense war of words with the Sydney Daily Telegraph screaming on its front page: “Poms Mitch-slapped as rampant Aussies bring back the sledge,” referring to fast bowler Mitchell Johnson tearing through the England innings.

The usually mild-mannered Clarke also wagged his finger in a close-up confrontation with Anderson, one of England’s worst sledgers, with the umpires needing to step in to cool tempers.

But the skipper said it was simply his competitive nature and had nothing to do with Australian bitterness over England’s 3-0 Ashes win sealed in August. Instead, it showed Australia were up for the fight.
“I think it is because both teams want to win so badly,” Clarke said.  “I respect that there is a line and both teams shouldn’t overstep that line.

Warner on Monday said Australia had taken the verbal fight to England to unsettle them. “I made those comments for a reason,” he told reporters at Brisbane airport. “Look, yesterday, the bounce and pace got to them again. It is Ashes cricket. Probably went a little bit too far with the comments, but it’s cricket and now it’s in the back of their mind.”

The defeat at the Gabba in Brisbane was one of the heaviest-ever in the Ashes for England with the tourists crumbling under the searing pace of Johnson to be all out for 179 late on the fourth day. They were skittled for 136 in the first innings.

With four more Tests to play, Australian selectors will stick with the same squad for the next clash in Adelaide starting on December 5, with Johnson vowing to keep bowling his fearsome short-pitched deliveries.

“I think you can get inside a batsman’s head,” he said. “I’ll keep doing it. It’s working.”

The fragility of England’s batting will be a concern for Cook with just a two-day game in the searing heat of Alice Springs against a Chairman’s XI to get it right ahead of the second Test. “We’ll go away, regroup, be honest with ourselves and come back. We’ve done it before. There won’t be any hiding,” said the defiant skipper.

But former England captain Michael Vaughan said it was not looking good.

“England’s batting was consistently poor. To only score 315 on a decent wicket… it was just the pace of Johnson,” he said. “I just feel the Australians have got this energy, this real hurt from the last three Ashes series and they want to make sure this series goes their way.

“There are some real issues in England’s top seven batting line-up,” he added. “They’ve got a lot of soul searching to do.”

An open letter to Anjali Tendulkar