Ashes 2013-14: Michael Clarke raises doubts over use of DRS

Ashes 2013-14: Michael Clarke raises doubts over use of DRS

Australian captain Michael Clarke has raised doubts over the Decision Review System (DRS), which the Board of Control for Cricket in India (BCCI) has been opposing from the very beginning, saying the controversial technology should not be used if it isn't perfect as it can "distort the process". 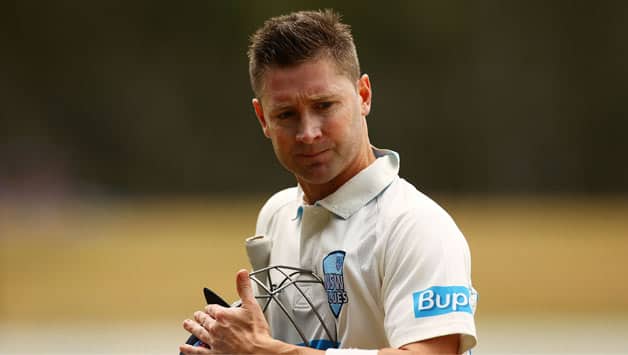 Australian captain Michael Clarke has raised doubts over the Decision Review System (DRS), which the Board of Control for Cricket in India (BCCI) has been opposing from the very beginning, saying the controversial technology should not be used if it isn’t perfect as it can “distort the process”.

“The referral system — where captains have two unsuccessful referrals at their disposal — can distort the process. I don’t like the tactics involved, where umpires and the teams know how many referrals are left, and change their decisions accordingly. It should be consistent for all players,” Clarke wrote in The Ashes Diary, his account of the 2013 Test matches in England.

The Indian cricket board has been a staunch opposer of the technology and believes it is not fool-proof.

Citing the example of Stuart Broad not leaving the crease after edging Ashton Agar at slip, Clarke said the third umpire should have powers to overturn a doubtful decision irrespective of the number of referrals available to the fielding team.

“I believe that if it’s clearly shown that the batsman hit the ball and he was caught, then the technology should be used to ensure he is out. If he’s hit in front of the wickets and the technology shows he is lbw, he should be out, regardless of how many referrals remain.

“As a captain, I’d just like the technology to be used to make more correct decisions, without all the complications of how many referrals remain or don’t remain. There shouldn’t be a numerical limit. If this means passing referrals back into the hands of the three umpires, on and off the field, then so be it. My final word on the matter — if technology, and the use of technology by the umpires, continues to be as inconsistent as it has been in this series [last Ashes], I would rather prefer it is not used at all,” he wrote.

Clarke said that he would not want the return of Hot Spot, which appears to have been shelved for the forthcoming Ashes series, until it delivers consistent results.

“My opinion is that if the technology isn’t perfect, it shouldn’t be used at all,” he wrote. “The inventor and owner of HotSpot (Warren Brennan”) came out and admitted it doesn’t pick up all nicks. Ok, that’s fine: HotSpot should not be used until it is more reliable.

“Once the technology has been tested and is shown to be correct, then the ICC should rule that every team has to use it. We should have the same rule for everyone.”

With Chris Rogers and a resurgent Warner set to open the innings, Shane Watson at number three if fit, Clarke at four and Steve Smith at five, who bats number six appears to be the most contentious issue for Australian selectors.

George Bailey is widely tipped to get the nod for his first Test cap after an outstanding one-day tour of India, although all-rounder James Faulkner or specialist batsman Alex Doolan are also in the running.

Paceman Mitchell Johnson is favoured to join Ryan Harris and Peter Siddle as the main strike bowlers with Nathan Lyon offering a spin option, while Brad Haddin is expected to keep wicket.

In contrast, England do not appear as settled with wicketkeeper Matt Prior struggling with a calf muscle injury and star batsman Kevin Pietersen battling a knee problem.

Clarke insisted he had not been paying attention to England’s lead preparations.

“To be honest I’m not concerned about England’s team,” he said.

“I’m really excited about where we sit as a team. I haven’t looked at England at all. I haven’t watched a ball they have bowled on this tour so far.”

Sachin Tendulkar has established himself as ambassador of India: Sharad Pawar