Johnson is relishing his intimidatory bowling which has rattled England.

Mitchell Johnson says he is relishing his intimidatory bowling, which has rattled England, earned him two man-of-the-match performances and put Australia on the edge of winning back the Ashes.

Johnson backed up his nine-wicket haul in the opening Brisbane Test victory with another eight scalps in Adelaide to have 17 wickets for the series at the stunning average of 12.50.

The fearsome left-hander, reaching speeds of up to 150 kilometres (93 miles) per hour, has had the Englishmen ducking for cover.

He was not selected for Australia’s 3-0 losing series in England this year, but is now the most substantial difference between the two sides.

Johnson was cleared to play in the next Test in Perth despite a mid-pitch collision with batsman Ben Stokes during the 84th over of England’s second innings on Sunday.

Australian skipper Michael Clarke says the trick has been finding what methods work to bring out the best in Johnson, who once bowled erratically and was the target of England’s taunting Barmy Army supporters.

“I’m going out there trying to bowl the way that I want to bowl. I’m bowling in short spells, that is what Michael [Clarke] has wanted me to do through this series so far, and it’s something that I have really enjoyed doing,” Johnson said after Monday’s 218-run second Test win in Adelaide.

“I guess having that intimidation factor is definitely a bonus. Look in the past and it wasn’t probably quite there in the last couple of Ashes series for me.”

“So to be able to come out, just back my ability, and know what I wanted to bowl, I have just really enjoyed it, so I will continue to do that throughout the series.”

Johnson is particularly looking forward to bowling on the fast WACA pitch for Friday’s third Test in Perth, where he has taken 36 wickets in five Tests at 19.67.

“I will mentally reset myself and I need to be prepared for the next Test,” he said.

“Going back home, I’m looking forward to getting around friends and family. Relax for couple of days and make sure I’m ready. It is a short turnaround but we are going to a ground where I really enjoy bowling.”

England captain Alastair Cook, who was twice a victim of Johnson’s bowling in Adelaide, said his team will be working on their batting techniques for the next installment against him.

“He’s bowled very well and we haven’t played him as well as we could have done. Some of our shot execution has been poor,” Cook said.

“I think anyone lower down the order, obviously it’s tough for them against a guy who’s bowling so quick and they’re working very hard in the nets and that’s all we can do. India vs South Africa 2nd ODI: Middle-order is a bit of a bother, says MS Dhoni 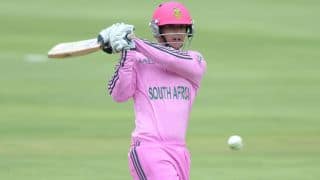