Australia are at 71 for two at lunch on Day One of the first Ashes 2013-14 Test in Brisbane at the Gabba. Chris Rogers and Shane Watson were the wickets to fall in the morning session on Thursday. Stuart Broad got both the wickets. David Warner is batting on 42 and Michael Clarke is on zero. 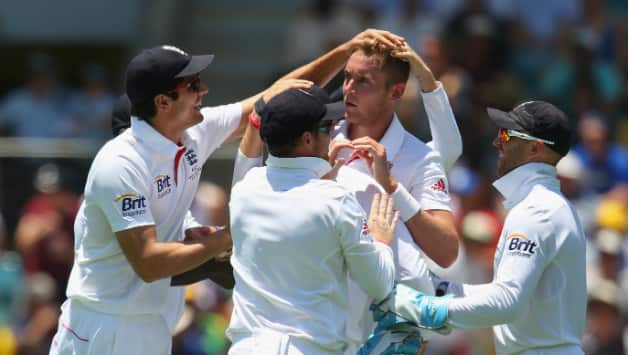 Australia are at 71 for two at lunch on Day One of the first Ashes 2013-14 Test in Brisbane at the Gabba. Chris Rogers and Shane Watson were the wickets to fall in the morning session on Thursday. Stuart Broad got both the wickets. David Warner is batting on 42 and Michael Clarke is on zero.

Earlier, Australia captain Clarke won the toss and had no hesitation in electing to bat first. George Bailey was handed his Test debut and Mitchell Johnson was included in the starting XI. Michael Carberry and Chris Tremlett were selected in the England line-up and Matt Prior too was in the XI after injury concerns before the start of the Test.

Rogers and Warner opened the batting for Australia. Warner was at it from the beginning as he hooked the first ball he faced for a four through fine-leg. But England and Broad struck quickly as Rogers was the first wicket to fall.

The left-hander was surprised by a short of a length delivery from Broad which bounced a bit extra. He tried to fend it off, but the ball took a thick edge and Ian Bell took a simple catch at gully. He was dismissed for one off nine balls.

Watson was the next man in. But England could not get any further breakthroughs for the few overs as the duo played each ball on merit. While Warner has looked at ease on both sides of the wicket, Watson was more willing to see out the morning session.

There was a bit of an injury scare for England as James Anderson tumbled over while fielding. The seamer was sliding to collect the ball in the outfield, but his knee got stuck in the turf and he rolled over abruptly. A similar thing happened to Simon Jones at the very same ground in the 2002-03 series and he was ruled out for the next few years. Luckily for England, Anderson seemed fine.

Just as lunch was approaching, Broad struck again. Another short of length delivery did the trick. The ball angled in from well outside off-stump, but just straightened after pitching and Watson poked at it and found the edge. Graeme Swann took the catch at second slip. Watson had to depart for 22 off 71 balls.

Clarke was the new batsman, but could not get off the mark as lunch was taken. Warner is batting on 42 off 68 balls. He has struck six fours. Lunch was taken as Australia are at 71 for two after 25 overs.