Well here we are, at the eve of the fifth and final Test of the Ashes 2013 series. It seems not that long back England and Australia were about to begin their marathon 10-Test saga 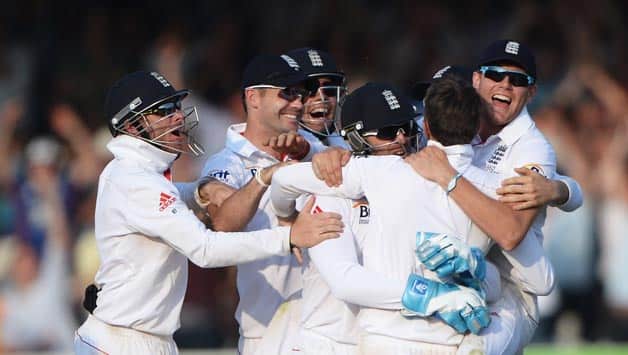 Well here we are, at the eve of the fifth and final Test of the Ashes 2013 series. It seems not that long back England and Australia were about to begin their marathon 10-Test saga. In a blink of the eye, the half-way stage has come. Both these teams will lock horns for the fifth time in England at The Oval in south London on August 21. England first delivered the Ashes and then sealed the series to take a 3-0 lead with one match to go.

It all started with an amazing series opener at Trent Bridge as England won by a mere margin of 14 runs thanks mainly to James Anderson’s 10-wicket match haul. The pre-series predictions were that England would win the Ashes comfortably, but Australia showed in that first Test that they were no pushovers. But Australia could not step up and were completely outplayed by England in the second Test at Lord’s and lost by 347 runs. Joe Root was the star of the match with a score of 180 in the second innings.

Australia captain Michael Clarke decided to finally show his class in the third Test at Old Trafford with an exemplary knock of 187. Australia looked destined to get their first win but the rain Gods were in England’s favour. The match ended in a draw and England retained the Ashes. The fourth match at Chester-le-Street was by far the most unpredictable. For large periods of the match, it was the Australians who dominated. They looked set to win the match, especially at tea on Day Four with their score reading 120 for one chasing a 299-run target. Then in the final session, the visitors lost nine wickets and the match by a staggering margin of 74 runs. Stuart Broad was the Man-of-the-Match as his 11-wicket match haul proved to be the difference.

If luck and better batting was in store, Australia could be leading the series 3-1 by now — it is a far stretch, but it could have been possible. England, on the other hand, have not been anywhere close to their best, especially with the bat. The likes of Alastair Cook and Jonathan Trott have not scored enough runs and it has been their bowlers who have won them matches. But there is an exception — Ian Bell. Without his runs, England would have lost the series. He has three centuries and two half-centuries in the series so far.

Now getting to the match at The Oval, both teams will look to change their line-ups a bit. England have injury problems and Tim Bresnan has been ruled out for the entire English summer. Fellow seamer Graham Onions is also out due to a finger injury. The England and Wales Cricket Board (ECB) on Sunday announced a 14-man squad for the fifth Test. The surprise inclusions were all-rounder Chris Woakes and left-arm spinner Simon Kerrigan. While Woakes is uncapped at Test level, Kerrigan is yet to play any match at international level.

The Oval track is one of the best for spinners in England. So we could be seeing Kerrigan getting his England debut and bowl alongside Graeme Swann. Chris Tremlett would seem the ideal option to come in for Bresnan. The right-arm fast bowler is 6’7’’, so, he will get that extra bounce. Along with Anderson and Broad, he could be very effective as all three are different type of bowlers. It would be surprising if Anderson, who has looked out of form in the last two Tests, is rested. He is still England’s leading bowler.

Andy Flower and Co would not like to change much in the batting department, despite their indifferent performances so far. Cook and Trott are due a big score, but another worry is of Root’s overall poor form. Apart from his century at Lord’s, he has looked like a fish out of water in the opening position. He will probably get another shot to justify his opening role. Jonny Bairstow might be dropped after a series of poor shows with the bat. Although dropping him would reduce their batting options, England have to test a few players before the return leg Down Under.

Daren Lehmann and Co have a lot to ponder as to whom they should pick for the match. The Australian coach said that apart from Clarke and Chris Rogers, the rest were not assured of their spots in the team. Australia’s collapse in the second innings in Durham did not help any batsman’s cause. Since the urn and the series are lost, Australia might think to tweak their entire line-up. Phil Hughes, Ed Cowan and Matthew Wade are in the reckoning to get a place in the starting eleven. Although Australia’s bowling has been good throughout the series, the likes of James Faulkner and Ashton Agar might be selected.

Agar did not impress much with his left-arm spin in the first two Tests, but he might get into the team purely on the basis that The Oval pitch is spin-friendly. He could give more support to Nathan Lyon, who has looked better as the series has progressed. Steven Smith also has not bowled enough, so, Agar could come in his place as both are equally adept with the bat. Australia’s main concern would be Ryan Harris’s fitness. The pacer has been their standout bowler and their leading wicket-taker with 20 so far. Peter Siddle has also looked a little off the boil in the fourth match. So a change could be ideal, as one eye has to be kept on the 2013-14 Ashes series.

But Australia are in a dilemma here. Shane Watson has not bowled many overs in the series and his injury in the previous match could prevent him from doing the same in the final Test. Trying to find the right combination would be very important for Australia. Too many changes could disrupt team harmony. Mitchell Starc might not be in the team after he vented his frustrations over Cricket Australia’s (CA) rotation policy.

This might be a dead rubber, but both teams would want to win for completely different reasons. England have not won at least four matches in the Ashes since the 1978-79 series. So, they would be chasing history. Australia would want the victory to avoid the infamy of becoming the first team since 1977 to not register a single victory in an Ashes series. When cricket debuted at the 1900 Olympics in Paris