Adam Gilchrist said Saturday’s comments attributed to him regarding Stuart Broad's controversial decision not to walk during the ongoing first Ashes Test were the work of a fake Twitter account. 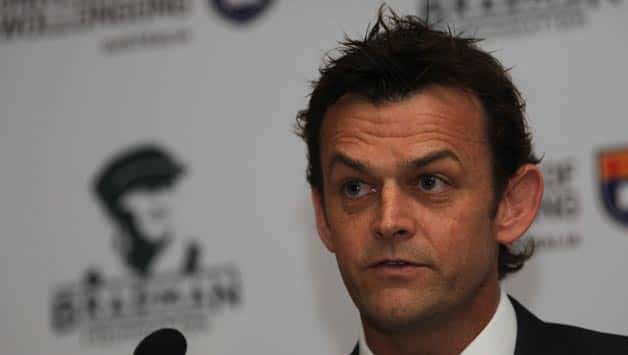 Adam Gilchrist said Saturday’s comments attributed to him regarding Stuart Broad‘s controversial decision not to walk during the ongoing first Ashes Test were the work of a fake Twitter account.

“It has come to my attention that a fake Twitter account in my name has been making comments regarding the Stuart Broad catch in the first Test,” said Australia great Gilchrist in a statement issued to AFP and other news organisations.

“I am concerned that some overseas media organisations have attributed these quotes to me,” added the former Test wicketkeeper, who retired from international duty in 2008.

“Some of these fake Twitter posts may have serious legal consequences,” Gilchrist said.

“While I understand the value of social media I am not on Twitter and have made no comments regarding the Stuart Broad incident.”

England’s Broad had made 37 on Friday when he edged teenage debutant spinner Ashton Agar to Australia captain Michael Clarke at first slip.

Australia appealed for the catch but Pakistani umpire Aleem Dar ruled in the batsman’s favour as Broad stood his ground.

As Australia had by that stage used up both their reviews, there was no way for them to overturn Dar’s decision even though replays showed a thick edge had deflected off wicketkeeper Brad Haddin‘s gloves to Clarke.

Broad’s decision to stay put reopened the whole debate about ‘walking’, the practice where batsmen who know they’ve hit the ball give themselves out without waiting for the umpire’s verdict, with West Indies legend Michael Holding saying he should be banned for an act contrary to the spirit of the game.

Traditionally, Australians have always waited for the umpire’s decision but Gilchrist, bucking the trend, was a noted walker during his career.

The comments attributed to the 41-year-old on Friday slammed Broad’s conduct, with the Twitter post saying: “Some people saying, you rely on the umpire. No you don’t, you rely on honesty. Disappointed by the Poms today, if you’re out — you walk.”

However, in his statement Saturday, Gilchrist insisted walking was a choice for individual players and that he’d no issues with Broad’s conduct.

“I had my go and I am now content to sit back and watch the current generation play the game in whatever manner they are comfortable with.”

Gilchrist in fact launched his own Twitter feed to plead with the imposter to shut the fake account.

“AdamCGilchrist this is Adam Gilchrist here. Stop pretending to be me. I know you say ‘parody’ on your profile but now its (sic) gone too far,” Gilchrist tweeted in the first of three separate posts.

“Press are now reporting your fake quotes to me. Hence legal action is underway.

“I have never been on twitter and only now to try and stop you. Show some respect, enough now.”

Broad eventually went on to make 65 on Saturday and helped Ian Bell (109) add 138 for the seventh wicket as Ashes-holders England set Australia a daunting target of 311 to win the first of this five-Test series.
At stumps Australia were 174 for six, still needing a further 137 runs for victory on Sunday’s final day.

Hashan Tillakaratne: One of the chief architects who made Sri Lanka a dominant cricketing force