England captain Alastair Cook hailed Joe Root's "character" as he did his best to keep a lid on expectations of a 5-0 Ashes rout after England's crushing 347 run-win over Australia in the second Test at Lord's. 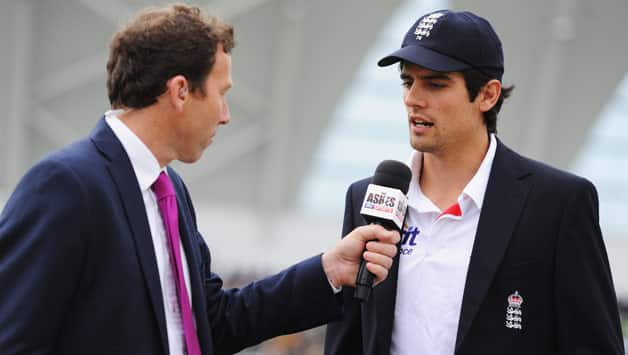 England captain Alastair Cook hailed Joe Root’s “character” as he did his best to keep a lid on expectations of a 5-0 Ashes rout after England’s crushing 347 run-win over Australia in the second Test at Lord’s.

Victory, achieved with more than a day to spare, left Ashes-holders England 2-0 up in the five-match series after their 14-run win in the first Test at Trent Bridge and on the cusp of retaining the urn, which will be theirs again should they win the third Test at Old Trafford starting on August 1.

Sunday’s success was a personal triumph for Root, still only 22-years-old and appearing in just his eighth   Test. The Yorkshire opener’s second innings 180 put England in a position of complete control.

It was Root’s second century in three Tests but first opening the innings after his maiden Test ton of 104 against New Zealand made as a middle-order batsman at his Headingley home ground in May.

Part-time off-spinner Root then took two wickets for one run in 11 balls on Sunday to dismiss Australia captain Michael Clarke and Usman Khawaja after both batsmen had made fifties.

During the course of his century, a textbook display of how to open the innings in a Test match, Man-of-The-Match Root became the first batsman to make 1,000 first-class runs this English season.

Asked if he’d been surprised by Root’s innings, which indicated a maturity beyond his years, England captain Cook — who as a 21-year-old made a hundred on his Test debut against India in Nagpur in 2006 — said: “To be honest, not with his batting we’ve seen over his very short international career what an outstanding player he is. He’s got the right character. It’s a lot about technique but he has the right character to succeed at Test cricket.

“He adapts his game to whatever is required. In a high pressure situation to score a big hundred is huge credit to him,” added Cook, the only England batsman to score 25 Test hundreds. “Seven overs, two for nine was a bit of a surprise,” said Cook of Root’s Sunday bowling figures. “But he keeps moaning when I take him off. He can be mighty proud of his performance in this game.”

England have never won an Ashes series 5-0 although they’ve twice been on the receiving end of such a humiliating reverse by Australia, in 1920/21 and, more recently, 2006/07.

Indeed you have to go back to 1886 for England’s nearest comparable equivalent Ashes success, a 3-0 whitewash (they won the 1977 Ashes by the same scoreline although that included two draws in a five-match series).

But despite overseeing Australia’s worst Ashes Test defeat in terms of runs since their 675-run hammering at Brisbane’s Exhibition Ground in 1928, the level-headed Cook, typically, wanted nothing to do with any whitewash talk.

“It’s certainly too early for that,” said the 28-year-old left-handed opening batsman. “You only have to look at our dressing room to see how hard we’ve had to work to win these two games.

“At certain moments in this game we were right under the cosh. It’s a huge credit to the lads that we’ve managed to pull through.

“It’s a winning habit. In four Test matches this summer we’ve won all four (England defeated New Zealand 2-0 in a two-match series) and I think that’s a good place to be.