England will bid to complete the second half of their Ashes mission when they face arch-rivals Australia in the fourth Test at Chester-le-Street on Friday. The drawn third Test at Old Trafford left England with an unassailable 2-0 lead in the series with two to play and meant they'd retained the Ashes. 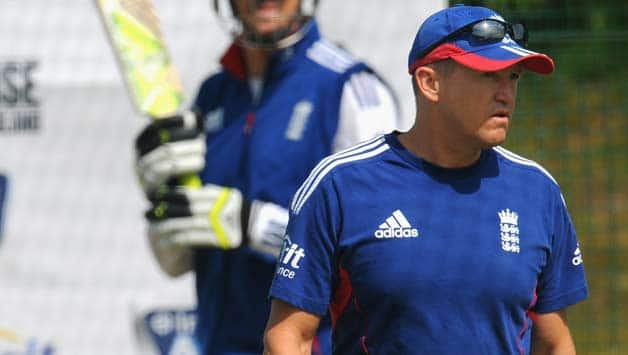 England will bid to complete the second half of their Ashes mission when they face arch-rivals Australia in the fourth Test at Chester-le-Street on Friday. The drawn third Test at Old Trafford left England with an unassailable 2-0 lead in the series with two to play and meant they’d retained the Ashes.

But it left open the possibility of a shared series, something that hasn’t happened in an Ashes campaign since 1972. It took England just 14 days to hold on to the urn this time around — the quickest they’ve settled an Ashes series in their favour since the end of the Second World War.

However, England coach Andy Flower was far from satisfied. “I suppose it is [a great achievement]. But for me it’s all about winning this series, so it is still alive with two Tests to go,” he said.

In Manchester, Australia produced a much-improved performance with England collapsing to 27 for three on Monday’s final day before rain ensured a draw.

The result meant Australia had ended a run of six successive Test defeats — their worst for 29 years — and avoided equalling their all-time record losing streak of seven straight Tests set by the 19th century teams of 1885-88.

Former Australia captain Allan Border said it looked like the tourists had “drawn their own line in the sand”, in much the same way his side did during the 1986-87 series, where, having lost the Ashes, they won the final Test in Sydney before starting 16 years of unbroken series dominance against England in 1989.

“England are worried,” Border said. “The way this side is going over the next few months, look out. Australia has the momentum.”

Then again, Australia had even more “momentum” during the 2010-11 Ashes after winning the third Test by 267 runs in Perth to level at 1-1. Yet England won the fourth Test in Melbourne by the huge margin of an innings and 157 runs to retain the Ashes.

Australia coach Darren Lehmann put the Old Trafford draw in context by saying: “We’re not going to lose five nil, so that’s a start. I think it [the momentum] has shifted but only time will tell that won’t it?”

At Old Trafford, Australia captain Michael Clarke‘s 187 was the cornerstone of a commanding first innings total of 527 for seven declared. But throughout his side’s lean spell Clarke has been making hundreds — one of the challenges for Australia will be to see if any of their other specialist batsmen can follow suit.

Both sides, with just a three-day turnaround between the end of the third Test and the inaugural Ashes match to be staged at the headquarters of north-east county Durham, have bolstered their pace bowling stocks. England have added Surrey fast bowler Chris Tremlett and Durham’s in-form Graham Onions to their Old Trafford eleven.

“We are quite willing to be flexible on that front,” said Flower. “It’s not a change of plan.”

Australia named a 12-man squad on Wednesday where Jackson Bird was added to their Manchester eleven amid concerns over the ability of injury-prone seamer Ryan Harris to play back-to-back Tests.

As for England regularly losing top order wickets with few runs on the board this Ashes, Flower said, “There are good new-ball bowlers on both sides. Of course, we’d like to be none down in that early period of play. But we’ve recovered well, and I think good sides do that.”

Meanwhile the Decision Review System (DRS) generated more controversy this series after Australia’s Channel Nine television alleged on Wednesday that England’s Kevin Pietersen was among players on both sides suspected of using silicone tape on their bats to avoid nicks being detected by Hot Spot technology.

It was a story refuted vehemently by Pietersen himself, while Clarke denied any Australians were involved in sharp practice.

And the International Cricket Council insisted its general manager of cricket, Geoff Allardice, was travelling to Durham solely to speak to the teams regarding their DRS concerns and wasn’t investigating any alleged attempts to “cheat” Hot Spot.