The Australian coach Darren Lehmann hinted at a few changes in the top-order as Australia prepare to square the series when they take on England in the second Test at Lord’s. 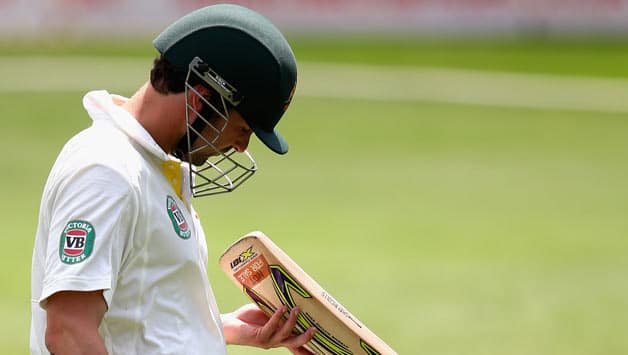 Australian coach Darren Lehmann hinted at a few changes in the top-order as Australia prepare to square the series when they take on England in the second Test at Lord’s.

Following the 14-run loss to England at Trent Bridge, Lehmann hinted at Ed Cowan’s ouster as he said that the latter’s spot in the playing XI could come under scrutiny for Lord’s.

”He’ll be disappointed with the shots. So are we,” Lehmann said.

According to Sydney Morning Herald, Lehmann also said that the fast bowlers who did not feature at Trent Bridge could be considered for the Lord’s Test starting on Thursday.

Fast bowler Ryan Harris could come in for Mitchell Starc solely because of the former’s ability to swing the ball at good speed.

Usman Khawaja could be a handy option at No. 3 but there are chances Lehmann could drop a batsman in favour of picking five specialist bowlers. There was also talk of the possibility of playing two spinners.
On that, Lehmann said, “There’s been talk about it [two spinners]. But until we see the conditions, it’s hard to say. You might go in a batter light and play five bowlers. I’m not worried about that. You just pick the best way to get 20 wickets. That’s the key. We know we’ve got to get 20 to win the Test match. We did it here and just missed out. We’ve got to back it up and do it at Lord’s. If we think two spinners is the right way to go, we’ll do that.”

”Our tail has done really well over a long period of time now but it’s time for the batters to make sure they’re making the runs and giving the tail a bit more time,” Lehmann said. ”I think we only batted for 63 overs in the first innings and 110 on Sunday. We’ve got to be reversing that about, batting for 120 overs-plus in the first innings of a game and making our runs then,” he added.