England are 119 for four at lunch on Day Three of the third Test match against Australia at Old Trafford on Saturday. Australia picked up the wickets of overnight batsmen Jonathan Trott and Alastair Cook. 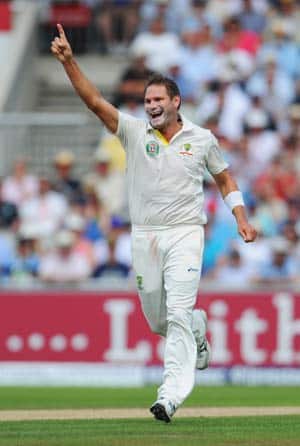 England are 119 for four at lunch on Day Three of the third Test match against Australia at Old Trafford on Saturday. Australia picked up the wickets of overnight batsmen Jonathan Trott and Alastair Cook.

Kevin Pietersen (33 not out) and Ian Bell (4 not out) are the unbeaten batsmen as yet another session belonged to Australia. England scored 67 runs but lost two wickets. Ryan Harris got Australia the first breakthrough of the session. Mitchell Starc got Cook to put the home team under severe pressure.

The conditions at the start of the day were overcast. Harris and Peter Siddle got appreciable movement when the day started.  England’s overnight batsmen — Cook and Trott were coming to terms with the conditions. But Australia kept persisting with tight lines and lengths and Harris got his reward removing Trott in the ninth over of the day. Trott was in a dilemma whether to play at the ball or leave the delivery. In that moment of indecision Trott got a healthy edge high on the bat and it was held low to his left by Michael Clarke standing in the second slip.

Trott’s dismissal brought Pietersen at the crease who injected the positivity in England batting. The England No 5 kickstarted his innings with a flick towards fine-leg for a boundary off Siddle’s bowling.  He then pushed Watson towards off-side and set off for a quick single. Chris Rogers had a shy at the non-striker’s end but the ball eluded the stumps and fielders. The result was extra four runs to England.
Starc tried to bounce out Pietersen but the plan backfired. Pietersen pulled couple of bouncers towards mid-wicket to stamp his authority. When Starc pitched full Pietersen was ready with a booming drive.

Australia tried out Nathan Lyon but he failed to trouble the England batsmen as he did on session three. Cook who was troubled the most by Lyon on Day Two played him well. Cook held one end up and allowed Pietersen to play his natural game. As England seemed to have weathered the storm they were jolted severely as Cook was dismissed.

Starc bowled a cross-seam delivery to Cook towards middle and leg-stump which was glanced fine. It was held by wicketkeeper Brad Haddin who dived full-length towards his right.

England will be looking to stitch partnerships and try to make a comeback in the game. Australia have been patient and bowled tight lines. They will hope to create chances and dictate terms to the hosts.