Sacked Australia coach Mickey Arthur says Michael Clarke's team travelled to England with no belief they could win the Ashes. 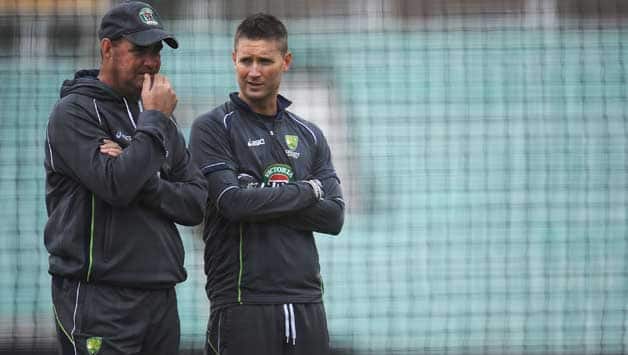 Sacked Australia coach Mickey Arthur says Michael Clarke‘s team travelled to England with no belief they could win the Ashes.

The South African, who was replaced by Darren Lehmann only 16 days before the first Ashes Test, said Australia’s developing side had planned to use the series in England as an information and confidence-gathering mission ahead of the return series at home later this year.

“We had to take the pain now to get reward at the end of the day. We had a goal that I’ll reveal [and it] was… we wanted to try and push England really hard in England, but we wanted to win in Australia,” Arthur told the Australian Broadcasting Corporation.

“This is what Michael and I wanted to do. We didn’t go into the series ever to lose it but we wanted to develop enough intelligence on all the England players.

“We were going to push them close and give the players and our team the confidence to see that England could get beaten and then go for them in Australia. That’s how we wanted to go about our escapade there.”

Arthur’s absence of conviction in Australia’s chances of claiming the Ashes in England turned out to be spot-on, with the tourists trailing 3-0 before the fifth Test, which started at The Oval on Wednesday.

The former coach reached a settlement with Cricket Australia (CA) after taking action against the organisation when he was dumped with two years to run on his contract.

Shane Watson, who fell out with Arthur, hit a Test-best 176 as Australia reached 307 for four at stumps on the opening day of the final Test, a breakthrough cheered by the nation’s media.

“When he reached his third century in eight years of Test cricket, Watson bowed his head and humbly raised his arms, in apology as much as acceptance,” Fairfax Media‘s Malcolm Knox said.

“The ground announcer read out that it had taken 114 balls and 172 minutes. Such was the batsman’s weary pose, he might have added: ‘And 47 Test innings. And three years.’ And an aeon of missed opportunities.”

The Australian newspaper’s Wayne Smith wrote: “There was only one question mark hanging over Shane Watson’s magnificent 176 — why did he wait until the Ashes were lost before uncorking it?”

When Craig McDermott, Greg Matthews and Shane Warne orchestrated one of the best comebacks for Australia in Test cricket

MCC Bicentennial match: Gavaskar signs off with a hundred at Lord's