England scored 294 for seven at stumps on Day Three of the third Ashes Test against Australia at Old Trafford. Kevin Pietersen (113) starred with the bat scoring his 23rd Test hundred while Mitchell Starc (three for 75) was Australia’s bowling hero. England need 34 runs to avoid the follow-on. Matt Prior (6 not out) and Stuart Broad (9 not out) are unbeaten batsmen. 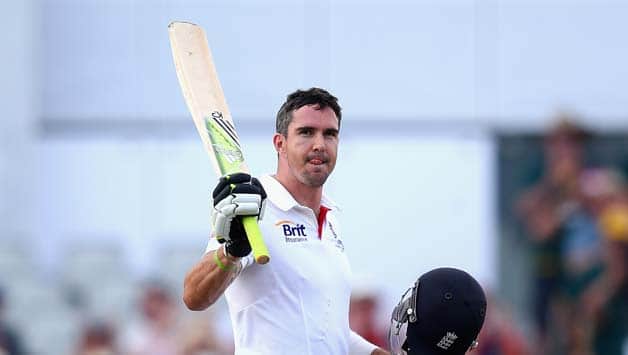 England scored 294 for seven at stumps on Day Three of the third Ashes Test against Australia at Old Trafford. Kevin Pietersen (113) starred with the bat scoring his 23rd Test hundred while Mitchell Starc (three for 75) was Australia’s bowling hero. England need 34 runs to avoid the follow-on. Matt Prior (6 not out) and Stuart Broad (9 not out) are the unbeaten batsmen.

It was Australia’s day as they did not allow the English batting to run away with the game. One man was expected to score big in this Test and he delivered. Pietersen had the stage set for a fighting innings. When he walked in Australia were on top having picked up three quick wickets. The conditions were overcast and the ball was moving just a bit. Australia kept persisting with tight a line and length and Harris got his reward removing Jonathan Trott in the ninth over of the day caught in the second slip playing an indecisive shot.

In walked Pietersen who counterattacked and injected momentum to England’s scoring rate. He showed intent for scoring runs and was ready to face the challenge thrown at him by the bowlers. Starc tried to bounce out Pietersen but the plan backfired. Pietersen pulled a couple of bouncers towards mid-wicket to stamp his authority. When Starc pitched full, Pietersen was ready with a booming drive.

Just before the lunch interval England lost Cook for 62 caught trying to play Starc fine towards the leg-side. The onus of steadying the English ship was on the middle order. In the post-lunch session Pietersen and Ian Bell were positive. They took the responsibility of resurrecting the innings.

The highlight of the second session was Pietersen’s positive approach, especially against off-spinner Nathan Lyon, who was getting the ball to spin sharply. The contest between him and Pietersen was enthralling. Pietersen countered Lyon’s threat by embracing the attacking option. He hit Lyon out of the attack by launching an assault to him — hitting him for two sixes. The first was hit over long-on and the next ball went over long-off. Lyon was still tossing the ball up and wanting to create an opportunity.

Bell looked in sublime touch. His drives were top-quality shots and he looked set to score his fourth consecutive Ashes hundred. Just when the fifth-wicket partnership was assuming serious proportions Harris castled Bell for 60 to give Australia the upperhand.

Jonny Bairstow joined Pietersen and the duo looked confident. They added 52 in quick time before Bairstow played away from the body of a delivery that was angled across by Starc. Bairstow played away from the body and the ball took his outside edge which was grabbed in the first slip by Watson. Starc was on a role. He was in good rhythm and looked especially menacing when he brought the ball back in. He had a well-set Pietersen with a similar delivery. At 113, Pietersen missed a straight delivery to give Australia joy before the end of Day Three. At that point England needed 48 runs more to avoid the follow-on.

Australia will be hoping to pick up the final three wickets relatively quickly and impose follow-on over England. The home side, however, will look to seek inspiration from the Australian tail which has had success in the Ashes so far. An intriguing battle is in store.