With Australia's bid to regain the Ashes hanging by a slender thread, Michael Clarke's team would be wise to turn to the spirit of Don Bradman for inspiration. 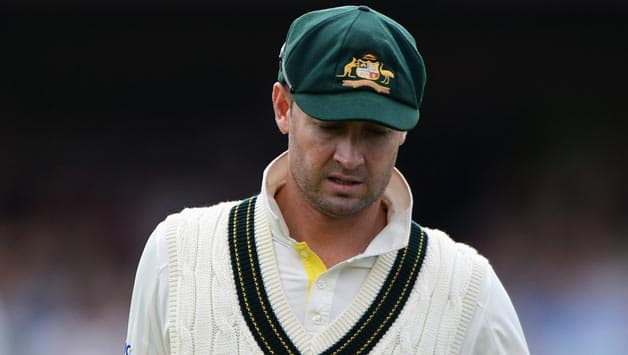 With Australia’s bid to regain the Ashes hanging by a slender thread, Michael Clarke’s team would be wise to turn to the spirit of Don Bradman for inspiration.

The Australians, already trailing 1-0 in the series, are up against it again in the second Test at Lord’s as England look to build on the lead which is already past 500.

Not for the first time in this series, Clarke’s men dug themselves into a hole with their shambolic batting. They produced one of the worst sessions by an Australian side in many years on Friday, collapsing from 42-0 to 128 all out.

And now they will need to produce an epic rearguard action in their second innings to avoid falling 2-0 down in the series.

In the circumstances, how Clarke would love to be able to call on a player of Bradman’s calibre. The legendary Australia batsman, who died aged 92 in 2001, might not be around to lead the fightback, but Clarke and his players could do worse than summoning his spirit by taking a trip to the Lord’s Museum during breaks in play.

A selection of Bradman’s personal memorabilia, worth over AUS $4.2million [£2.52 million, $3.85 million, 2.9 million euros], from the Bradman Collection has been delivered to England in recent days for display at Lord’s. These include significant bats, a Bradman Australia blazer and a family scrapbook.

The Bradman Collection has been housed at Adelaide Oval, the headquarters of South Australia where Bradman completed his career after making his name with New South Wales, since 2008.

While the ground is undergoing a $535 million development, the South Australia Cricket Association, the State Library and Marylebone Cricket Club (MCC), which owns Lord’s, along with Bradman’s family, have agreed to have the items on display at the ‘home of cricket’ from the Ashes Test until September.

One of the bats on show was used by Bradman when he made the then Test world record individual score of 334 against England at Headingley in July 1930.

“We know that many Australians travel to the UK for the Ashes, and I would expect many of them would love the opportunity to get an insight into Sir Donald,” SACA chief executive Keith Bradshaw, who previously held a similar position at MCC, said.

But whether Clarke and his under-fire team-mates will be inspired to produce some much-needed Bradman style heroics remains to be seen.

Geoffrey Dymock: The 3rd bowler to dismiss all 11 batsmen in a Test match