Australia lead England by 331 runs at stumps on Day Four of the third Ashes Test at Old Trafford. Bad light forced an abandonment of play as umpires Marais Erasmus and Tony Hill deemed playing conditions unsafe for the players. This call irked Australia captain Michael Clarke who was batting on 30. Then constant rain made it impossible for the play to get underway. 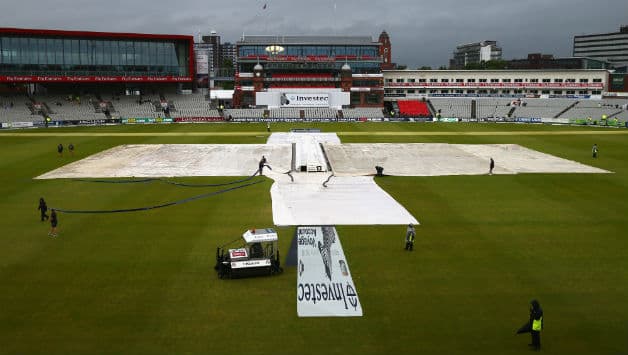 Australia lead England by 331 runs at stumps on Day Four of the third Ashes Test at Old Trafford. Bad light forced an abandonment of play as umpires Marais Erasmus and Tony Hill deemed playing conditions unsafe for the players. This call irked Australia captain Michael Clarke who was batting on 30. Then constant rain made it impossible for the play to get underway.

England camp was slyly ecstatic as they were attempting to slow the game. England’s over-rate was 12.2 which highlights the fact that they were not too eager to get on with the game. A draw in Manchester is good enough for Alastair Cook and his men to retain the urn.

Australia seemed to have a target in mind possibly 350 before Clarke would have hoped that his bowlers have enough overs to press for a victory. On the fourth day morning England’s lower-order resistance ensured that Australia batted again. It was a frustrating morning for Australia as England kept scoring runs. Matt Prior began the proceeding by scoring a couple of boundaries against Ryan Harris.

Stuart Broad then took over and took on the role of the aggressor. The duo added 58 runs and Australia’s plans to make England bat again were nipped in the bud. Broad and Swann were dismissed in quick succession. Prior then farmed strikes and the last-wicket pair batted for eight overs. England were aiming to keep the visitors on the field for a longer period. The visitors bowled out the hosts for 368 — thus achieving 159-run lead.

Australia opened the innings with David Warner in place of out-of-sorts Shane Watson. The batsmen showed positive intent and the lead kept growing. Rogers (12) fell trying to run the ball to third-man. Warner played an enterprising knock of 41 before being caught by Joe Root at deep square-leg off Tim Bresnan’s bouncer. This brought huge cheer and jeering at Old Trafford. But Warner’s knock had given Australia a solid launching pad. At No 4 Watson walked in and looked to play freely.

Usman Khawaja, who batted at No 3, looked compact for his 14 before he was bowled round the legs in an attempt to maneuver Swann to leg-side. Watson played a cameo but he was out trying to upper-cut Bresnan but the ball went straight to Kevin Pietersen stationed at third-man.

England skipper Cook had employed an in and out field. Australian batsmen were looking to maneuver the ball around to take their lead forward. Khawaja tried to work Swann towards the on-side but walked far too across his stumps and he was bowled for 24. In the next over Watson guided Bresnan’s short delivery to Kevin Pietersen at third-man. Steven Smith showed positive intent by lofting two sixes over long-off. He was run-out for 18 trying to run a risky second run. He was too late trying to get back as Clarke didn’t respond to his partner’s call. Brad Haddin (8) and Mitchell Starc (11) sacrificed their wickets for the team’s cause.

The rain has come to England’s rescue. For Australia they have their work cut out. They need to dismiss England if they have to make a comeback in the series and still have the little chance of winning the urn.