Australia wrestled back into contention for the first Ashes Test played at Trent Bridge after losing just two wickets in the afternoon session of Day Four and moved within 200 runs of their target. 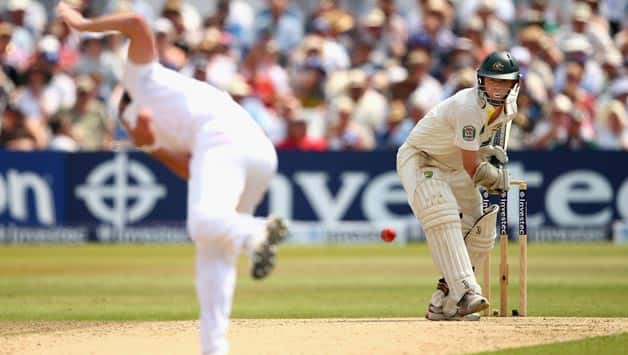 Australia wrestled back into contention for the first Ashes Test played at Trent Bridge after losing just two wickets in the afternoon session of Day Four and moved within 200 runs of their target. Shane Watson (46) was the only wicket to fall until two minutes to tea, before Joe Root struck in the final over before the interval to dismiss Ed Cowan (14). The visitors took tea at 111 for two.

Openers Watson and Chris Rogers picked up from where they left off at lunch and scored at a good rate of above three an over. Everything was going hunky dory for the Australians until the drinks break, the first ball after which Stuart Broad trapped Shane Watson in front.

Rogers carried on along with Cowan, who survived a king pair and looked to have taken Australia through to tea without further damage, only for him to go for a big drive off Root’s spin bowling in the last over before the break and get the edge to first slip.

Rogers reached the break unbeaten on 50 and looked extremely confident in his strokeplay. The upcoming partnership with skipper Michael Clarke could be a match-defining one as Australia look to get their Ashes campaign up and running with a win. England, meanwhile, need eight more wickets and have 200 runs to play with.

Earlier, Australia bowled England out for 375 in the first session, setting themselves a target of 311. Australia then took lunch at 28 for no loss, needing 283 more runs to win the match.

England, resuming their second innings at 326 for six, lost wickets at regular intervals after Stuart Broad edged James Pattinson to wicketkeeper Brad Haddin, and walked. This was before the England all-rounder brought up his half-century early in the day.

Ian Bell, unbeaten on 95 overnight, also notched his 18th Test century soon after, before Broad’s wicket ended their potentially match-winning 138-run partnership. Not long after Broad’s wicket, Bell gave Haddin his second catch of the morning after edging Mitchell Starc to make it 371 for eight.

Graeme Swann and Steven Finn then fell on successive deliveries to Peter Siddle as England’s innings ended on 375, a marked improvement 218 for six that they were on Day Three.

The Australian openers, Shane Watson and Chris Rogers, then confidently played out the half hour left before lunch as the visitors went into the break 283 behind with all wickets intact.